Ireland at Lightspeed- An Itinerary for the Truly Driven! (Part 2)

The journey through Ireland at lightspeed continued from Killarney onto Cahir, Cashel and Kilkenny.

Day 3- Blarney to Cahir to Kilkenny

After our Torc Falls adventure, we picked up the rest of the crew at the B&B and drove towards Blarney Castle, in Blarney, Co. Cork. Give yourself about 1.5 hours for that trip.

We arrived at Blarney and went straight to the castle. The town is very cute, with shops and restaurants, although it’s clearly touristy. We gave ourselves about 3 hours to see the castle, but we quickly learned it’s worth a full day. 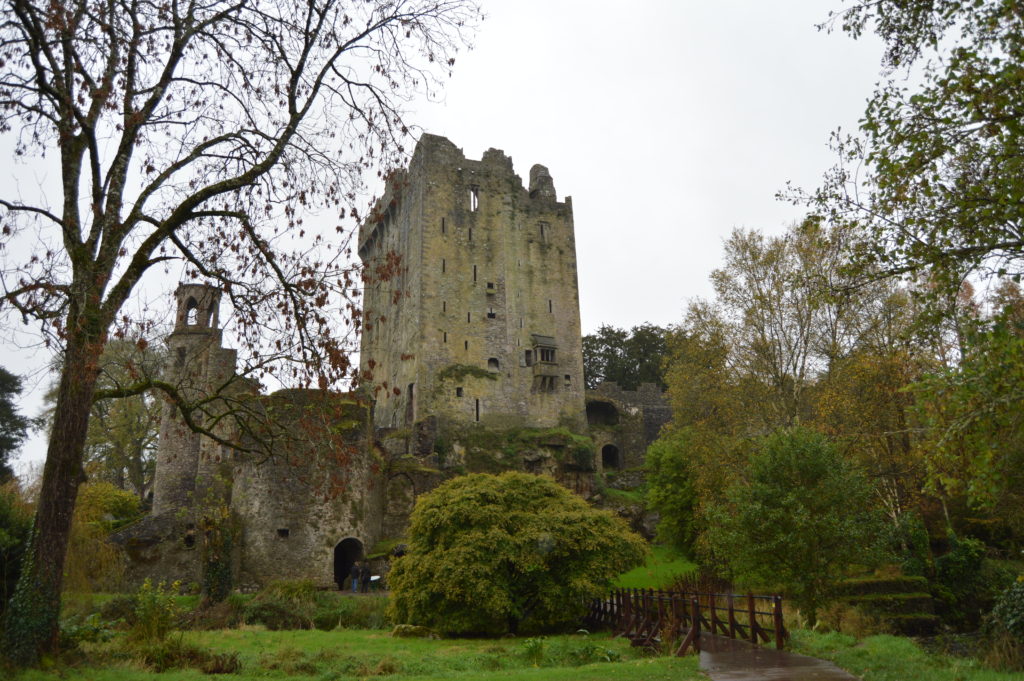 The climb up the spiral stone staircase was a bit hair-raising, given the steep ascent. The stairs were damp, as I’m sure they often are in Irish weather, but there is a rope attached to the wall to hang on to, or pull yourself up. At the top, you come out onto the ramparts and will have a nice view of the castle grounds. If you wish to hang upside down over the side of the castle wall and kiss the Blarney Stone, go for it. There is a nice gentleman there to make sure you don’t slip off the side, but, I passed on the gift of gab. Hanging off the very high castle wall was deterrent enough,  but my germaphobia cringed at the idea of kissing a stone millions of others had already smacked. 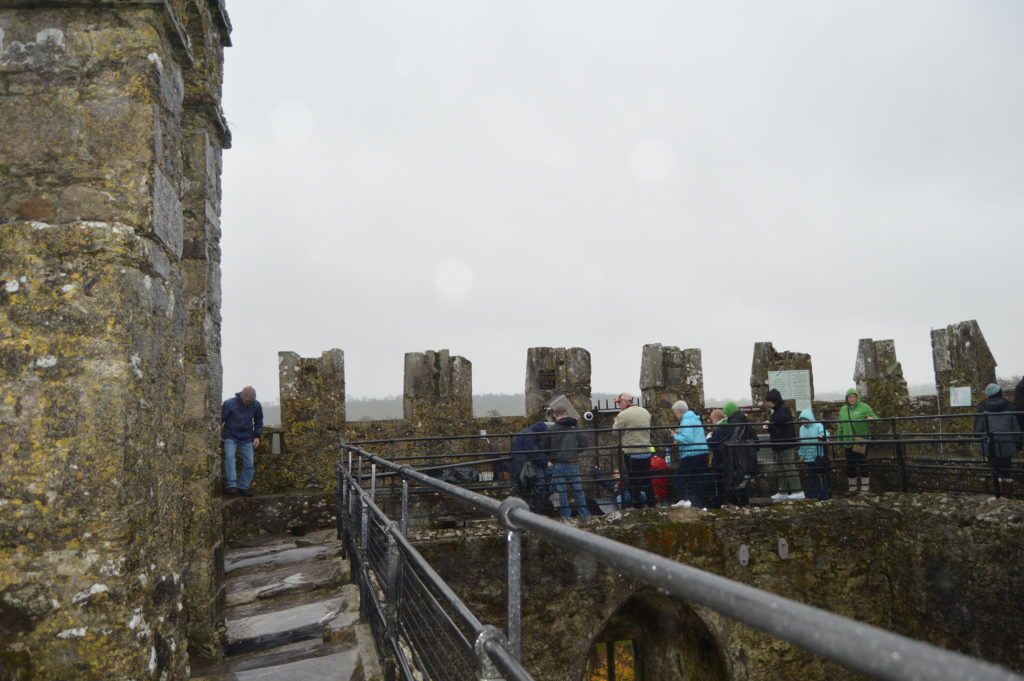 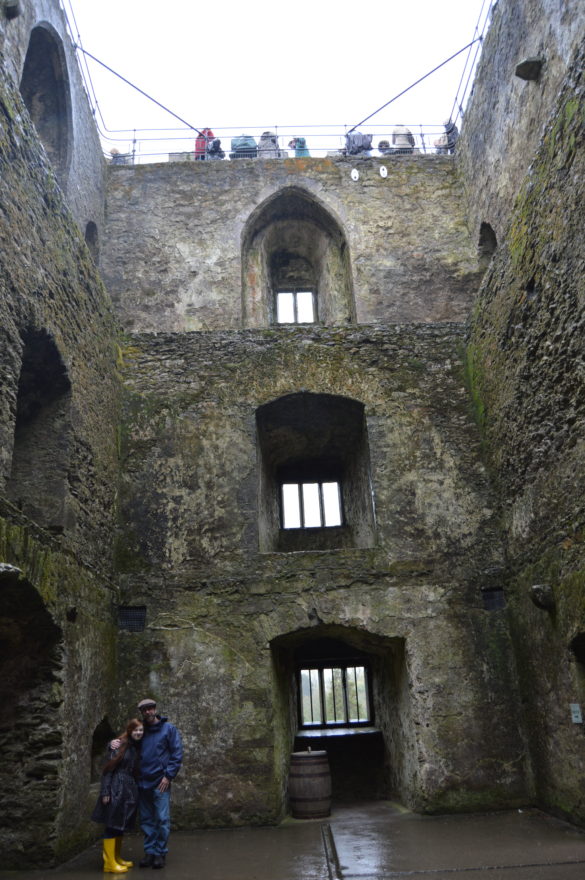 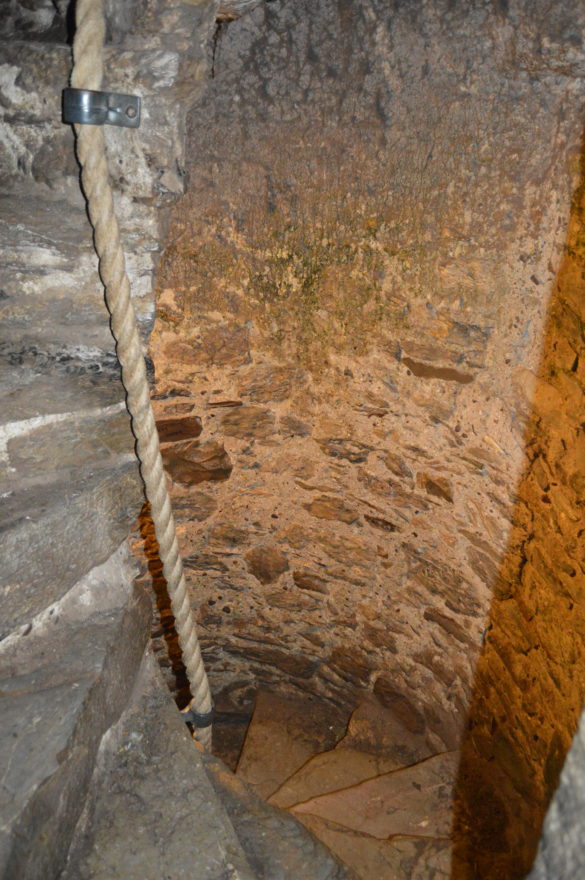 After a loop around the walk way, head back down another narrow stone staircase. We spent some time exploring Badger’s Cave and the Dungeon, to the side of the castle. Both were interesting and have their own intriguing historical stories.

From there, don’t miss a walk through Rock Close, with it’s rock dolmens, fairy glade and interesting landscaping.

The traditional castle gardens are also lovely and huge, spanning some 60 acres. They have a poison garden, with some plants considered so toxic they are ‘caged’, a fern garden and more. We barely scraped the surface of the gardens, running short on time as usual. 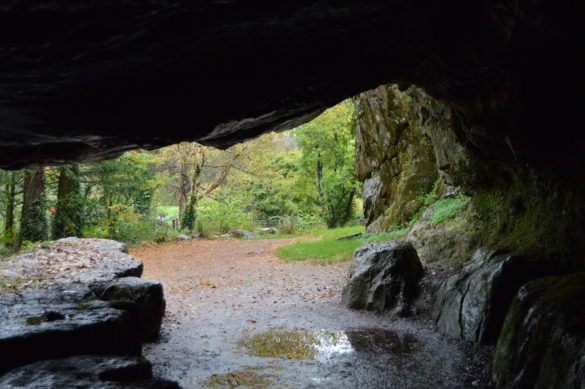 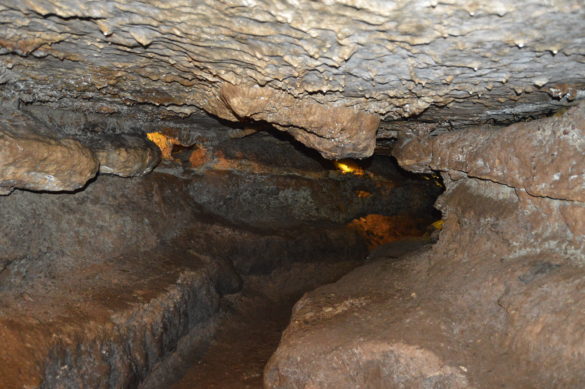 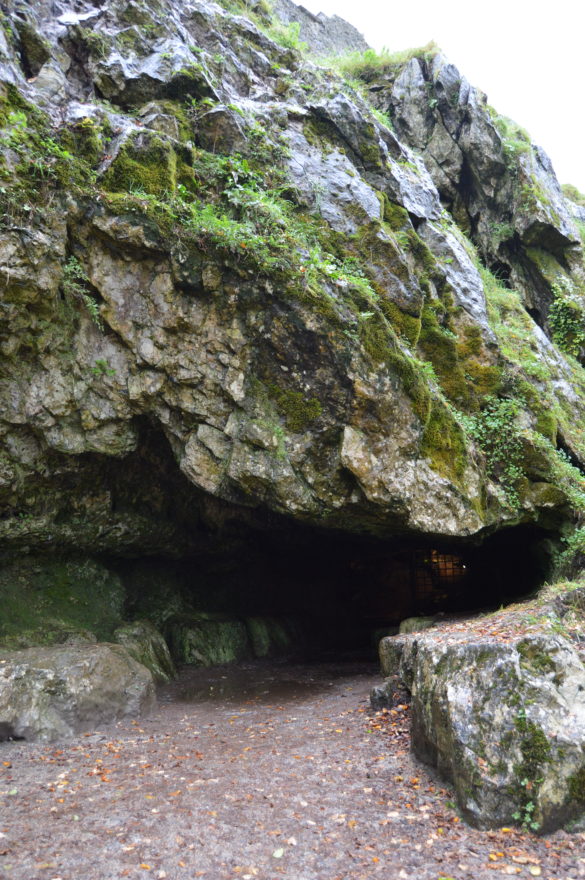 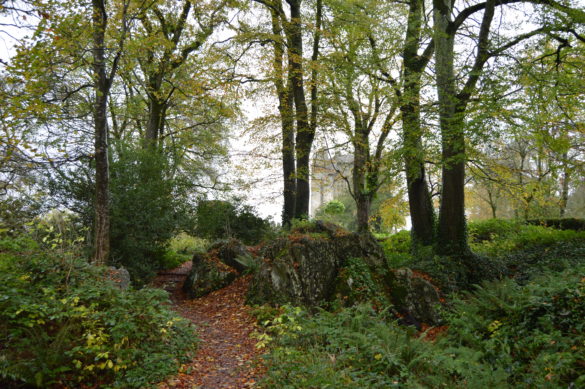 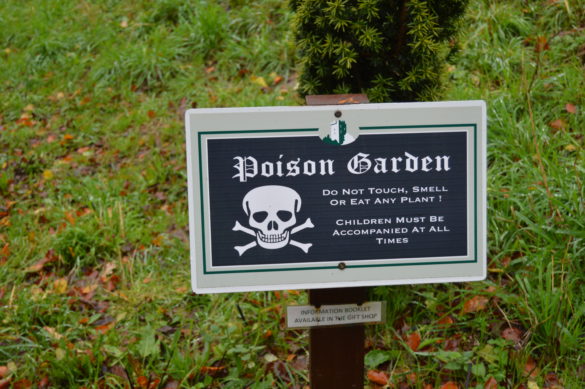 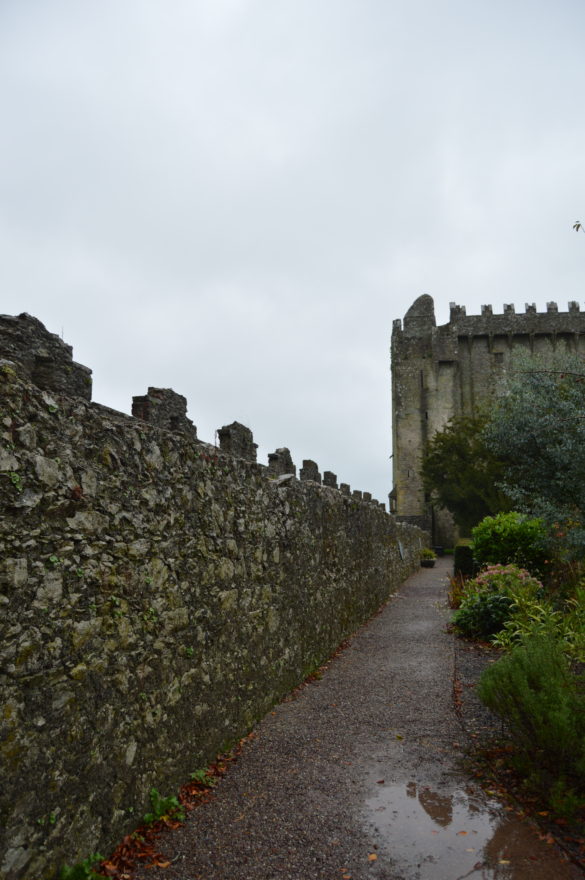 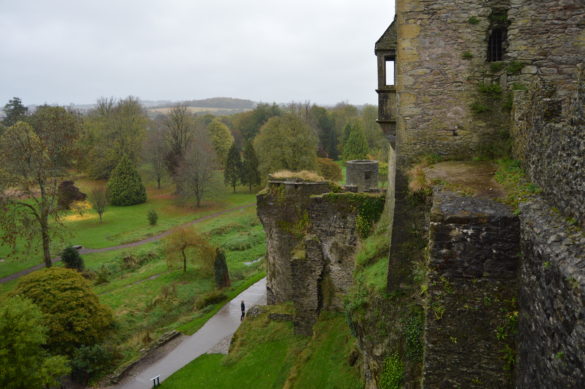 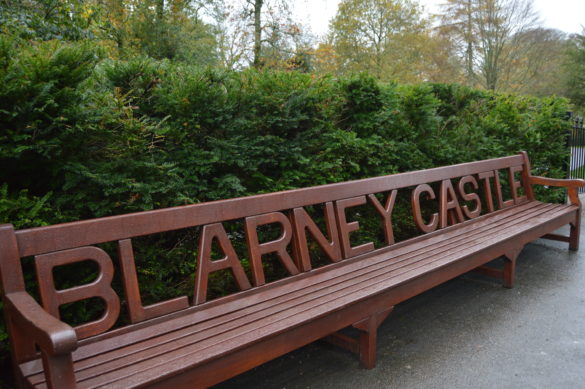 We grabbed a hot drink and food in the Stable Yard Café, before heading out.

Our plan was to stop next at the Rock of Cashel, but we stopped first at Cahir Castle, about 1 hour from Blarney. It’s fully restored, and almost modern. It has lighting and heating installed, making for a comfortable visit, if not historical. They have some period furniture throughout the castle, but don’t allot much time for this visit. We were in and out in less than an hour. 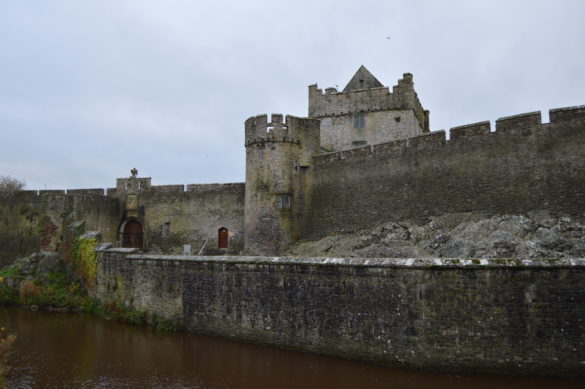 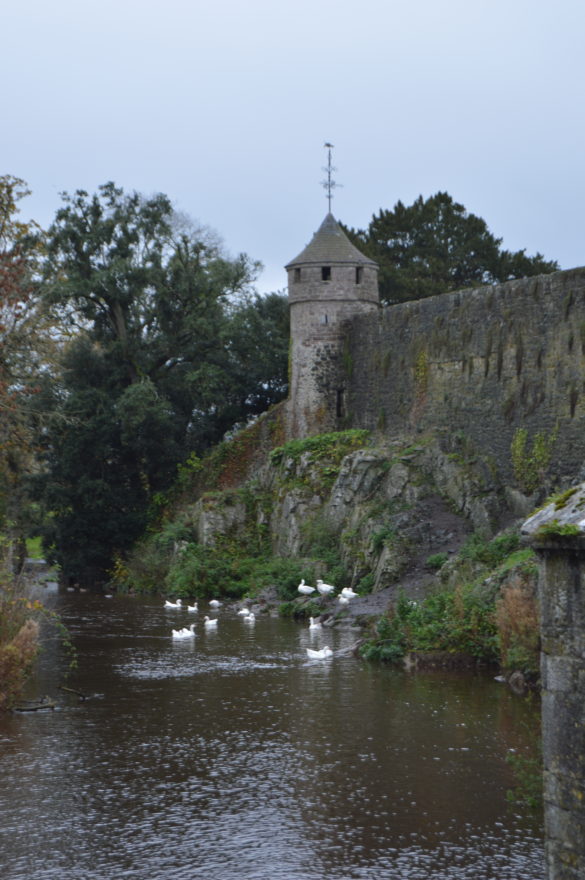 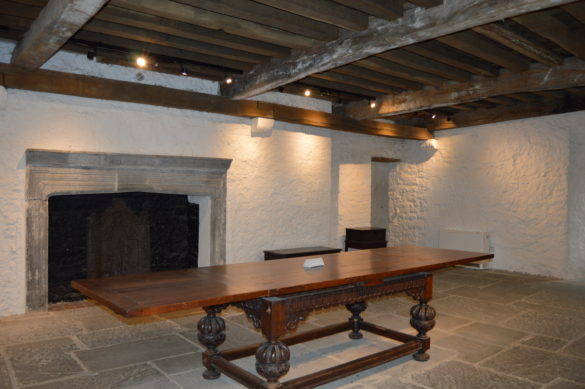 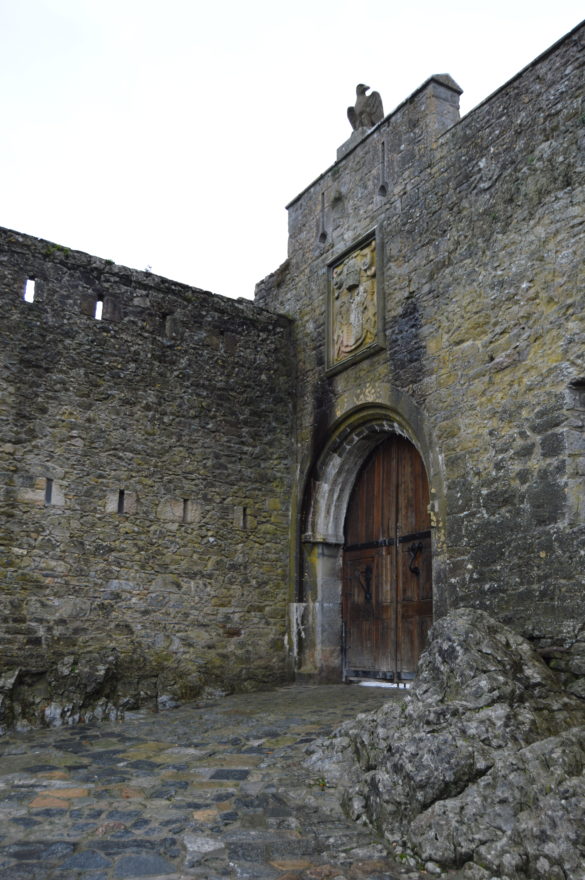 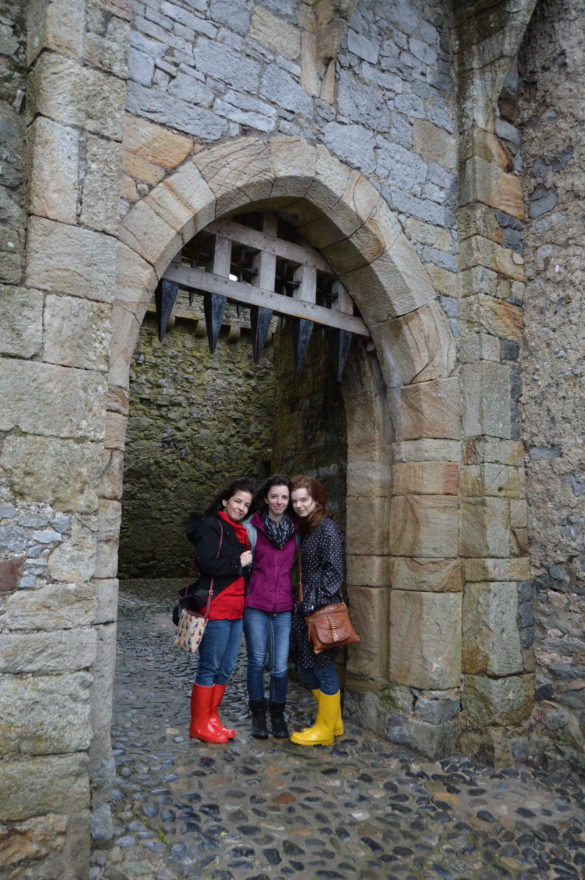 From there we rushed to Cashel, only to discover we missed the last entry by about 10 minutes. I was so perturbed that we missed Cashel to see Cahir, that I guess I might have a bit jaded view of Cahir, as it is ranked one of Ireland’s top castles

Rather disheartened, we trudged down the hill into town and found a pub for dinner. From there, we made the remaining 50 minute drive to Kilkenny.

When we arrived at our B&B in Kilkenny, the host opened the front door, took a look at us, and summed up our crazed day: “Walked all the way from Cashel have ye?” We still laugh every time we think about it.  Good ‘ole Irish humor!  Our host was the proprietor of Fanad House, and he fixed us an amazing breakfast the next morning. When we stumbled down in the morning, still recovering from the day and night prior, we found continental breakfast laid out. Assuming that’s all there was, we took a few pastries and sat down. Within moments, he appeared and asked us what hot breakfast we would like- eggs and bacon, pancakes, whatever we fancied. This lovely gentleman then proceeded to cook breakfast for 4 by himself, whilst singing in the kitchen. He was so charming, I hope he is still doing well these days. 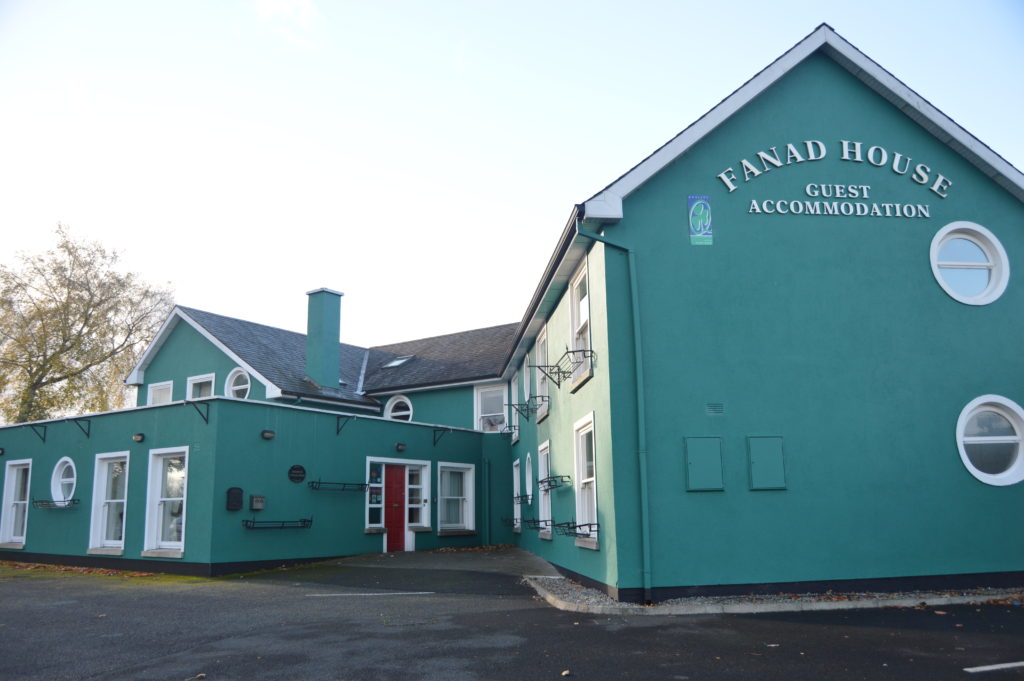 Day 4: Kilkenny and the Drive to Dublin

A day to explore Kilkenny isn’t bad, but giving yourself a bit more time would be ideal. We sped through Kilkenny Castle and the Medieval Mile in about 5 hours. Fanad B&B is near one end of the park behind Kilkenny Castle, so it was an easy stroll.

During our November visit, the lawn behind the castle was covered in white crosses, a memorial to Armistice Day and those from Kilkenny who served during World War I. It was moving to see the demonstration of remembrance and care throughout Ireland, and in Paris, during the November visit. I feel, in America, WWI is a distant historic event, but in Europe they still recall it as The Great War. 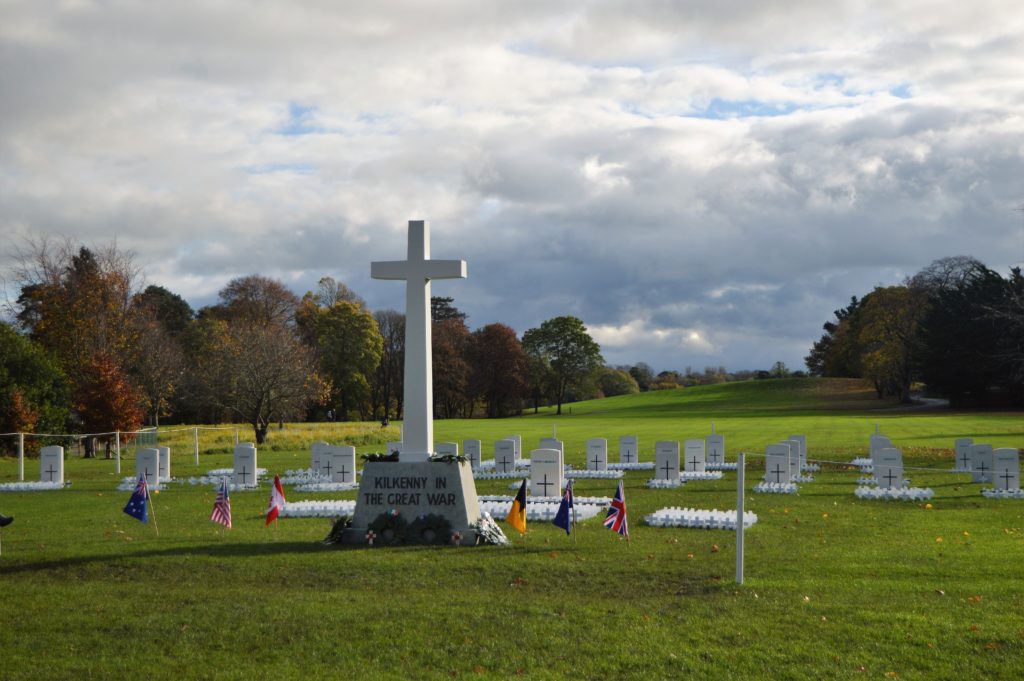 The castle entry and ticket counter is just inside. First, view the video summarizing the history of Kilkenny Castle, before taking the guided tour. The castle was built in in the 1200’s, but it’s not a medieval castle in the sense of Cahir or Ross Castles, instead revealing 19th century interior decor.  At the time of our visit, photography was not permitted, however, that ban has since been lifted. Medieval history is my forte, so Kilkenny Castle wasn’t my favorite, but the tour guide was amazing, full of interesting stories and historical facts. I highly recommend a visit to Kilkenny Castle, to grasp a broader picture of Irish castle history. One of the unique aspects of Kilkenny Castle is it’s long story- built in the 1200s, host to great figures such as Strongbow, it stood through the centuries as a fortress, government center and private residence. It was occupied until the 1930s, when it fell into disrepair. The government obtained the castle in the 1960s and began the restoration process. 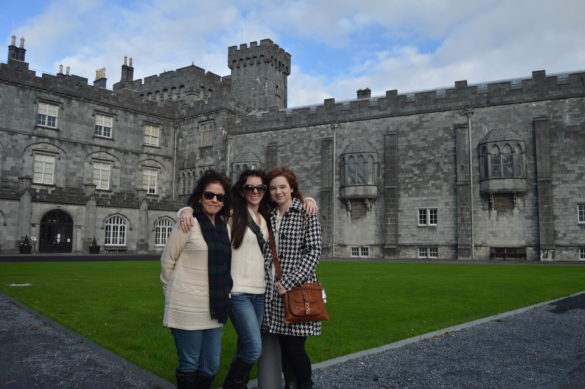 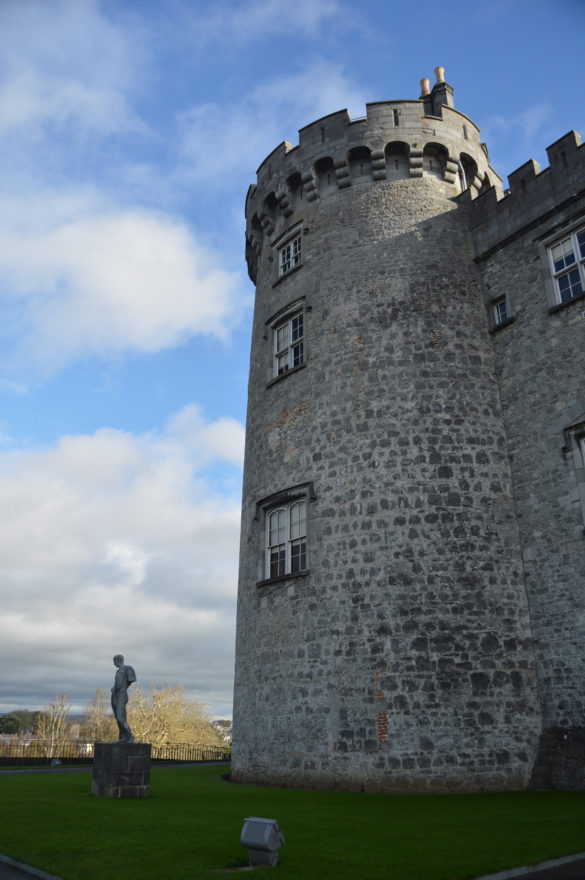 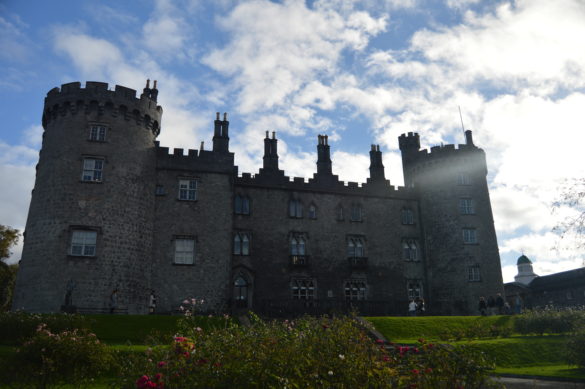 Kilkenny Castle sits at one end of the Medieval Mile, so it’s a great starting point for exploration. The mile is a loop, so start on one side and follow it down and around.

We crossed the street from the castle to the Castle Yard, now home to local artisan shops. They have unique items, such as handmade pottery, so stop by.

From the Castle Yard, take a left and then a right on Rose Inn Street. There is a tourist info center here, where you can grab a Medieval Mile map if you haven’t already. 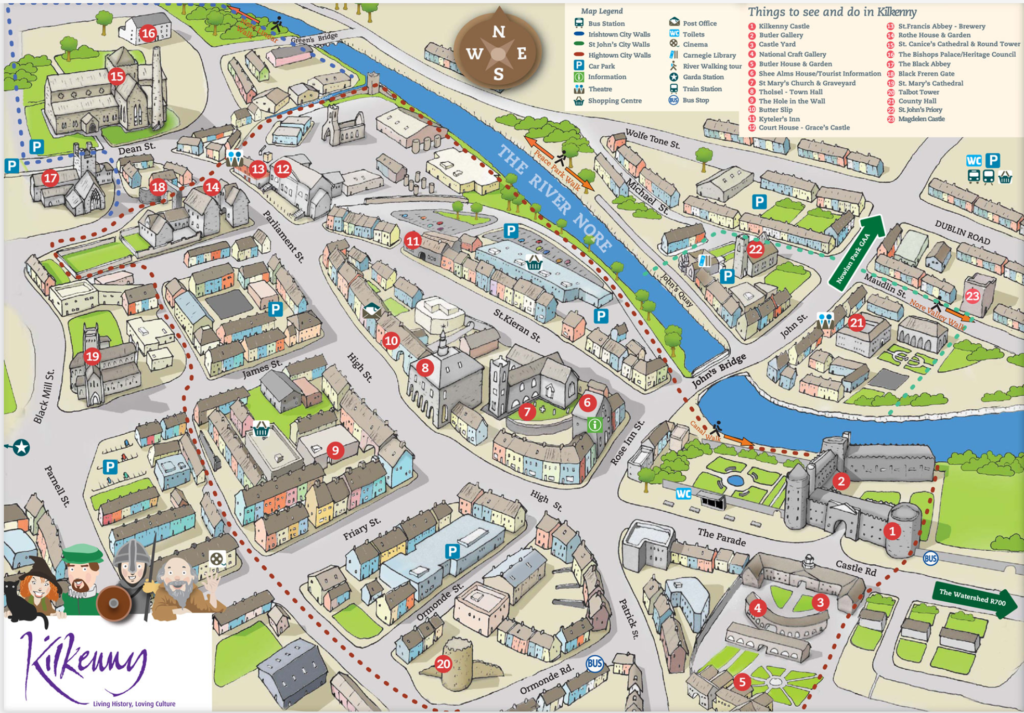 Take the next left onto St. Kieran Street and pass St. Mary’s Church. We headed to Kyteler’s Inn, a historic pub. I expected a tourist trap, but it’s actually a fun place with good food! According to the story, the inn was found in 1324 by Dame Alice Kyteler, who was subsequently accused of witchcraft after her four husbands each died. She escaped, while her maid was not so lucky. If the hype is true, you might even see one of the troubled ghosts still lurking at the inn. 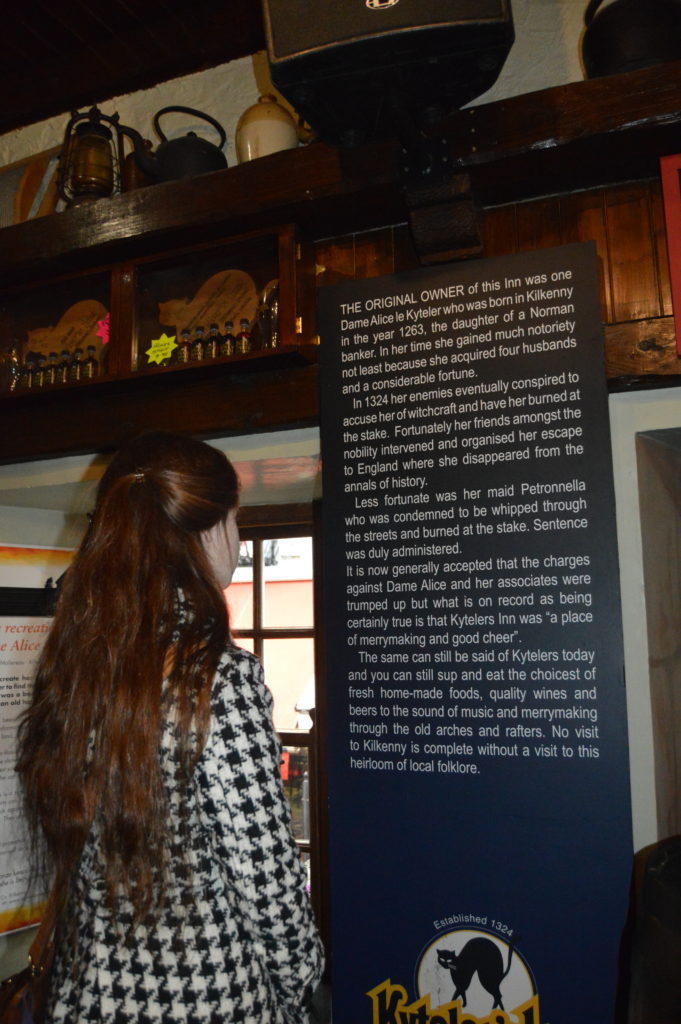 The story behind Kyteler’s

About 2 short blocks past Kyteler’s is the Smithwick Experience. I’m not a beer drinker, but if you are, they offer daily tours. There are a cluster of stops right here, including Grace’s Castle, Rothe House and the Black Freren Gate. We walked through the gate, but didn’t stop for the other two. At the end of the street sits St. Canice’s Cathedral and Round Tower, the other end of the Medieval Mile from Kilkenny Castle.

The city traces its roots back to St. Canice’s monastery of the 6th century, upon which the cathedral was built in the 1200’s. The accompanying round tower dates back to the 9th century, making it the oldest building in Kilkenny. Built as protection for inhabitants, today it is one of two round towers in Ireland you can still climb! The cathedral has some lovely stained glass, and several tomb effigies. They also have a small counter with postcards and interestingly, jewelry featuring emblems and designs from the cathedral’s stained glass. 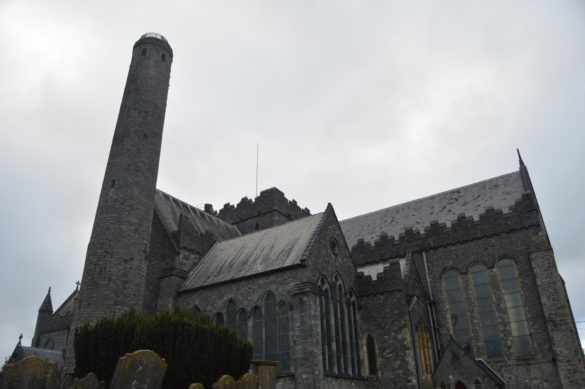 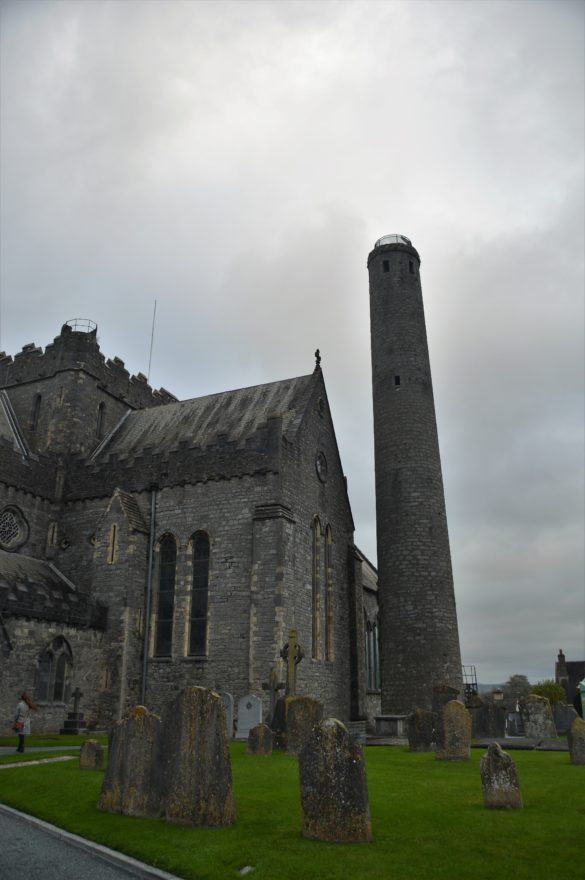 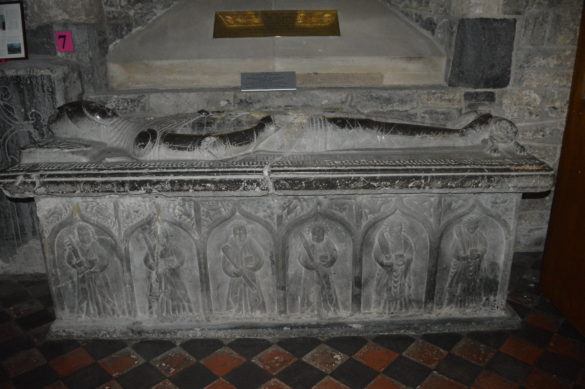 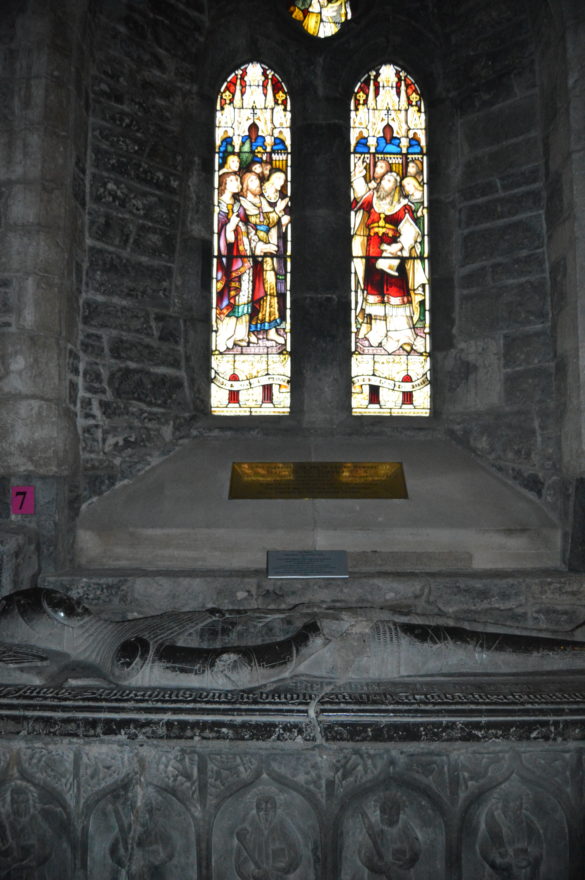 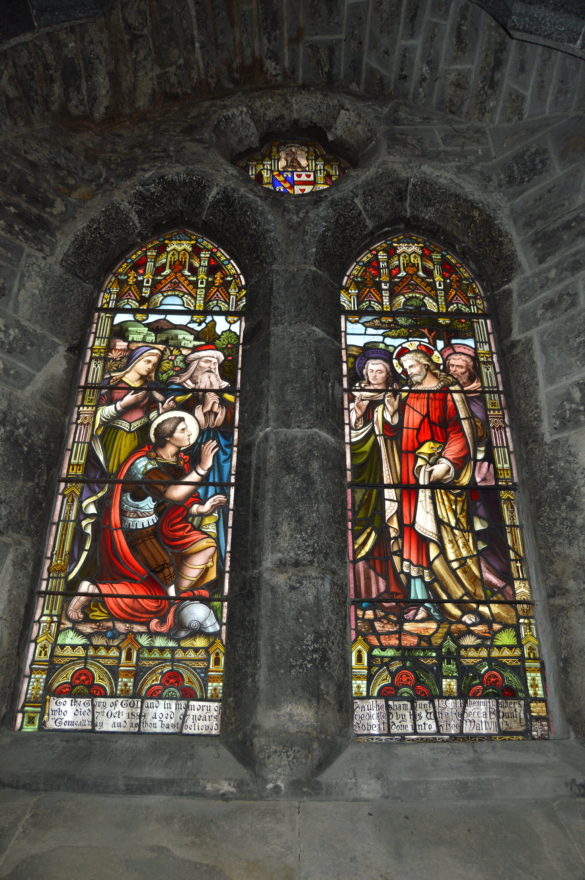 Leaving the cathedral, pass by the Black Abbey, and then walk back onto High Street to remain on the Medieval Mile. You’ll come to the Butter Slip, on your left. It’s a tiny, medieval lane next to the Town Hall, connecting High Street to St. Kieran’s.  Lastly, if you can find it, stop by the Hole in the Wall. Possibly the world’s smallest bar, it’s in a historic townhouse off High Street and William Street. I so wanted to go, but alas, we were in too much of a rush- so I can’t speak to it, but it sounds awesome and has good reviews.

Lastly, if you cut over to the right on Ormond Street, from High Street, you’ll see Talbot Tower, a remnant of the medieval city wall.

In summary, that was our quick trip through medieval Kilkenny, with most of our time spent at the castle, Kyteler’s Inn and St. Canice’s.

We then drove the 1.5 hours to Dublin, to spend another hour searching for our hotel. In truth, it isn’t hard to find, but we had no GPS or map, only my dad’s hand written directions. The Dublin Airport Manor is situated right by the airport, making for an easy early morning ride to the terminal.

Days 5- Read about how to spend one day in Dublin.

The journey continues in Ireland at Lightspeed- Part 3 (finale!).

Top 5 Things to Do in Racine

Unusual Things to Do in Colorado Springs