At last, the final leg of the journey! I hope you will read all three parts of this trip, for an idea what you can cram in 11 days!

Part I Ireland at Lightspeed: Arrival in Shannon, Adare, Killarney

Day 9: Return to Dublin and Drive to Galway

Day 8 was mostly travel, with sightseeing done out the window. We flew back from Paris to Dublin, picked up the car and drove across the country via the M4/M6 to Galway. It’s roughly 2 hours and 15 minutes, putting us into Galway about 4pm.

We stayed at St. Jude’s B&B, just a few blocks from the Latin Quarter. It was very nice, beautifully upkept, with a great breakfast. 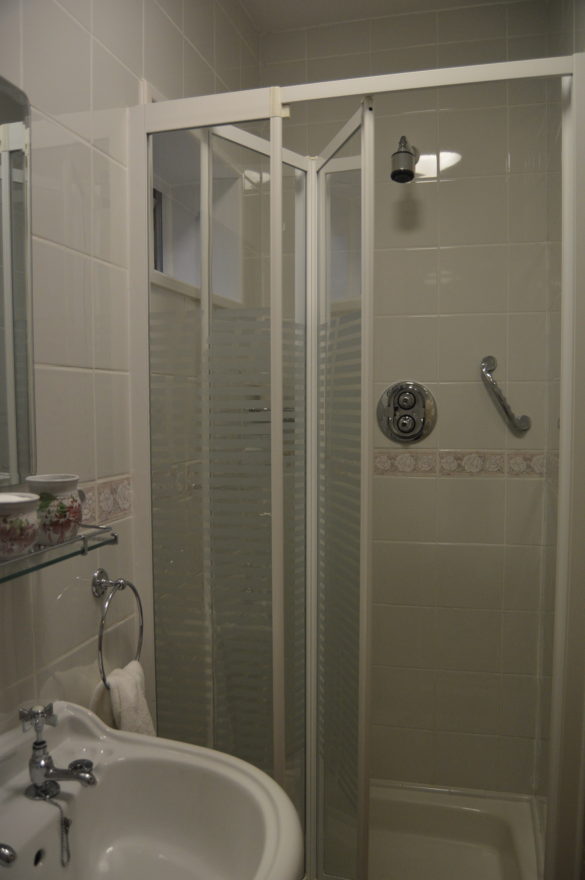 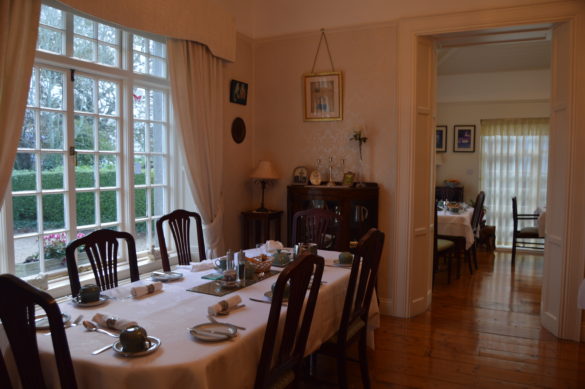 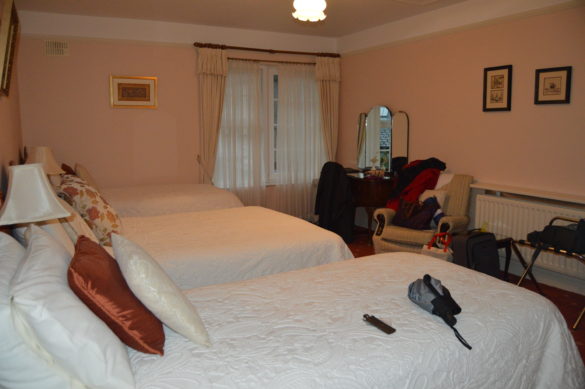 It was raining, windy and already dark, but my mom and I were determined to hear some Irish music, so we walked into town. It was a rather humorous affair, as we now say we saw every pub in Galway. We bounced into The Quays, Tig Coili and lastly King’s Head. Having flown from Paris, and driven from Dublin, we were starving! Well, one pub doesn’t serve food, one doesn’t serve it on Sundays and one doesn’t serve it after 5pm…  We eventually grabbed a quick meal, but not before we left our umbrella in one pub and I showed my ignorant American self to a bartender. First, I asked him if we needed to wait to be seated. He smiled and said “No love, it’s Ireland. Sit wherever you like’. Ok… so we did. Surprise, no one came to take our order, so I went back to the bar. He winked at me and said “Lass, I’ll take your order for anything you like’ and smiled in a cheeky Irish manner. It’s funny how the Irish can say just about anything and it comes off in good humor, no offense taken. All in all, we never did hear much Irish music, but, as I said, we did see the inside of every pub in Galway (and learned a bit about Irish pub protocol!).

Day 10: Galway, the Burren, Cliffs of Moher and Bunratty Castle

Our b&b hosts fixed a fancy breakfast, and then we were off at break neck speed. We had dinner banquet reservations at Bunratty Castle that evening, with a planned route to see the Burren and the Cliffs of Moher along the way. Without any stops, our route from Galway to Dunguaire Castle to Poulnabrone, to Cliffs of  Moher, ending at Bunratty Castle is nearly a 3 hour drive. Add all the stops, and you’ve got a full day itinerary.

Dunguaire Castle is open April-October and holds medieval dinner banquets. During our November visit, it was closed, but still made for fun photos. The castle sits on an inlet of Galway Bay, marking the beginning of the stark Burren landscape. 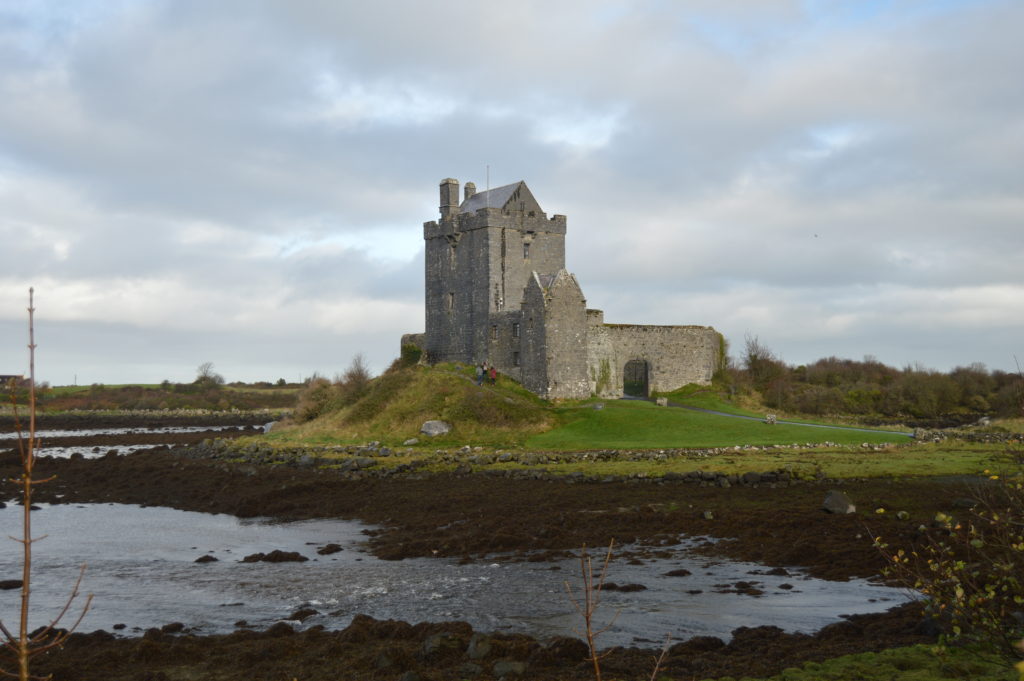 Along with Killarney National Park, the Burren captured my imagination and seems to encapsulate the otherworldly, ancient Irish myths of old. With its limestone landscape, some say it’s lunar, but for me, I saw Middle Earth, Narnia or Westeros. Stone giants or faerie folk would be at home here.

Just look at this photo- a visible veil between this world and the other. 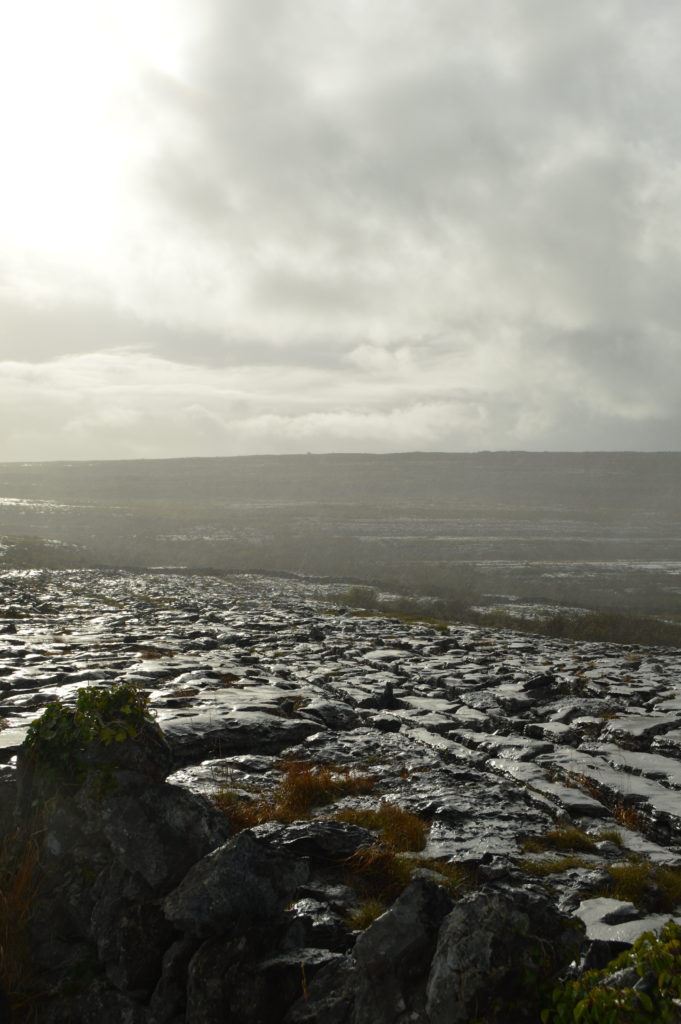 Next up, we stopped at Poulnabrone Portal Tomb. Cairns, dolmens and tombs are scattered throughout the Burren, but this is the best preserved. It was excavated in the 1980s, and revealed not one, but 20+ people buried underneath. It is thousands of years old, and the archaeologists believe the tomb was used for centuries as a burial location. 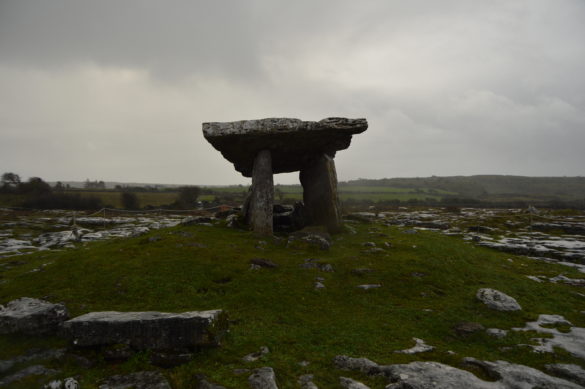 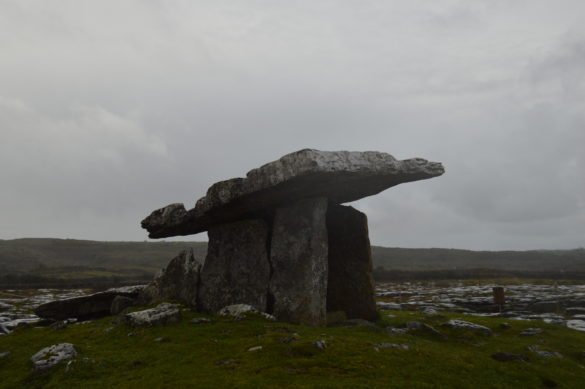 Of course, there are spots of civilization along the way, including several B&Bs and hostels. About 15 minutes east of the portal tomb sits the Burren Perfumery. Family owned and operated, all of their scents are based on the surrounding nature. You’ll also pass a cute pub, if you’re hungry. Between the tomb and the perfumery, there is a stone fort ruin, but we didn’t stop.

To stay on our route, head directly west back to the coast. You’ll skip Lisdoonvarna, which if it’s September and you’re single, might be a spot you don’t want to miss! (They hold a huge match making festival). In about 40 minutes, you’ll reach the Cliffs of Moher.

There’s a visitor center, café, restaurant and shops at the cliffs. It is one of the most visited spots in Ireland, so high season will be very busy. During November, it wasn’t bad at all, although the weather left something to be desired. The week after we visited, the cliffs were closed due to gale force winds!

The path runs along the cliff edge, to O’Brien’s Tower. In the opposite direction, the paved path eventually ends and there is dirt path (with no wall). 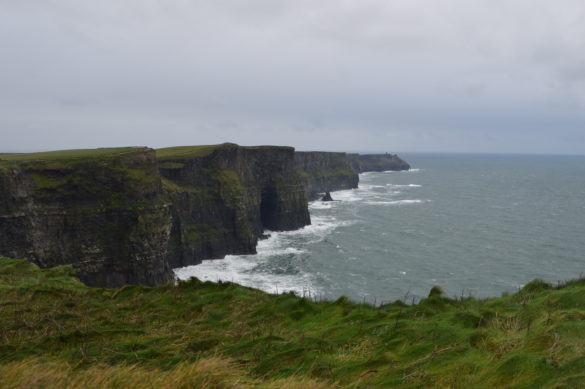 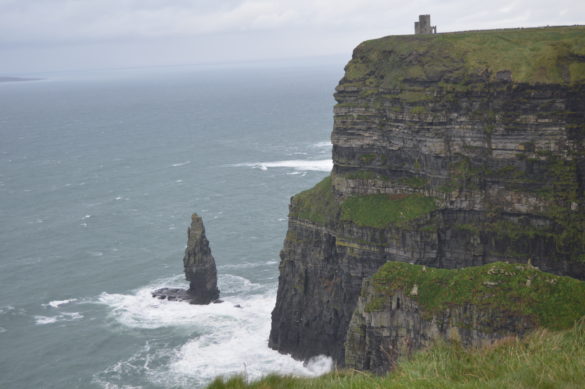 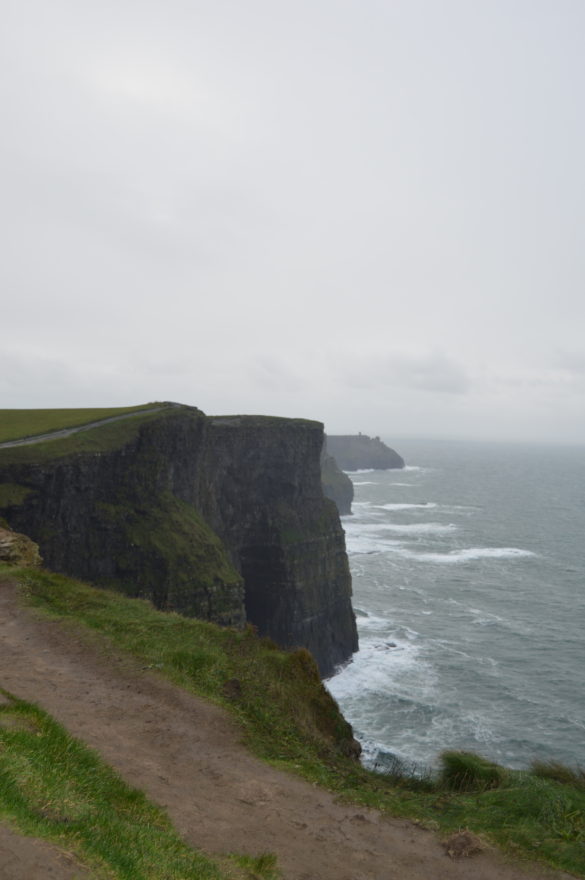 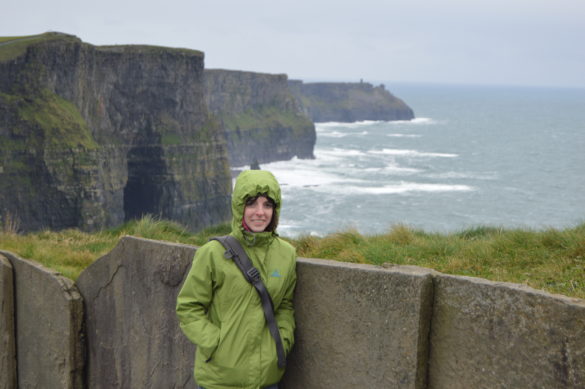 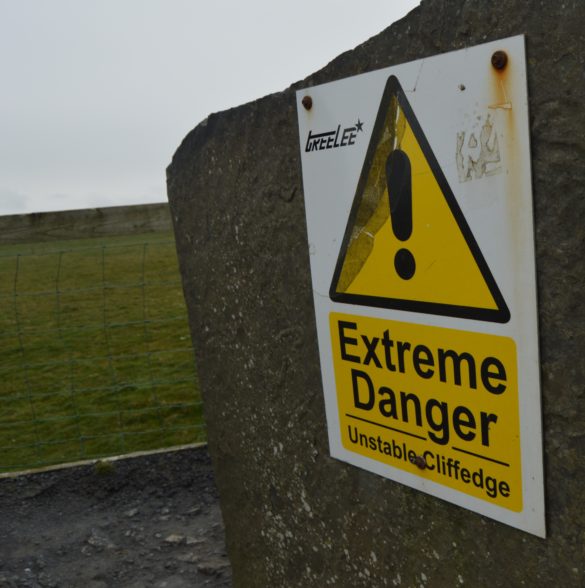 We drove the rest of the way to our hotel, Bunratty Manor. Highly recommend- it was very nice! We then walked (5 minutes or so) to Bunratty Castle. They have a 19th century folk park, which was closed by the time we arrived. The banquet was well worth it by itself, though. Sure, it’s a bit cheesy (think Renaissance Festival), but it’s fun. The food was decent, and the mead was great! There’s a bit of a story to accompany the meal, along with live medieval style music. It
was a great way to conclude our last night there. 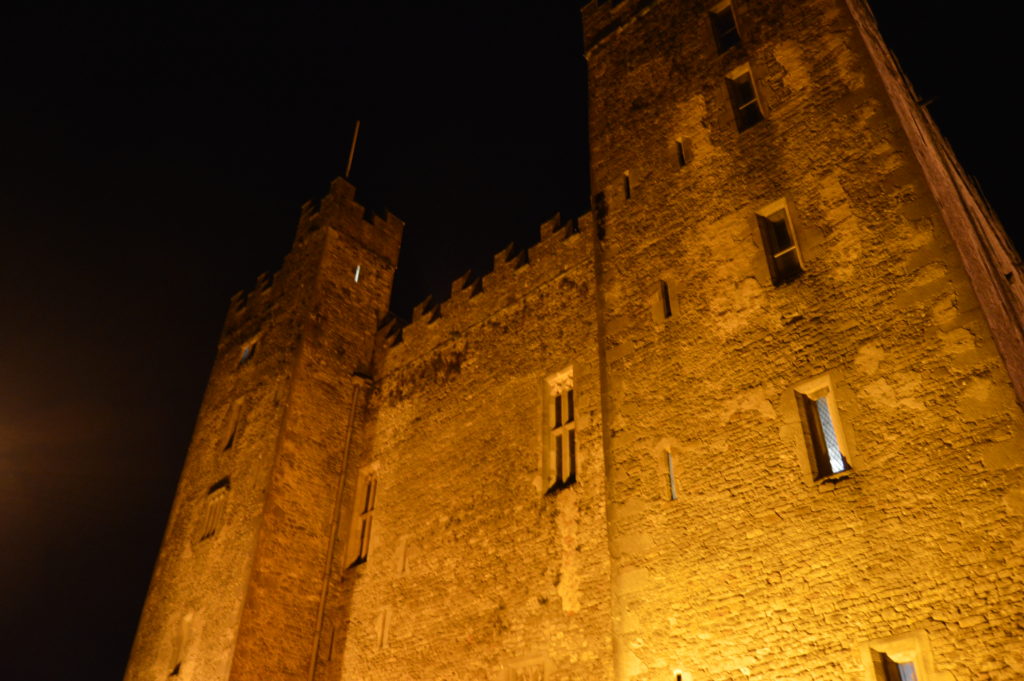 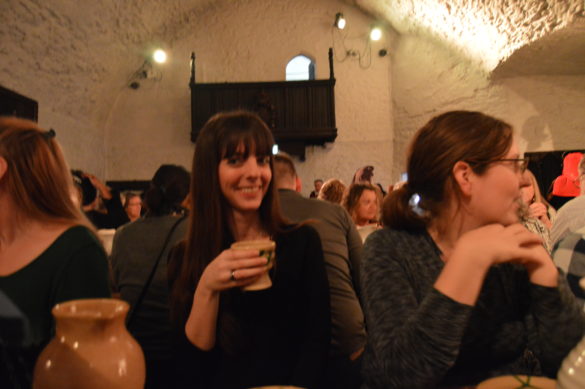 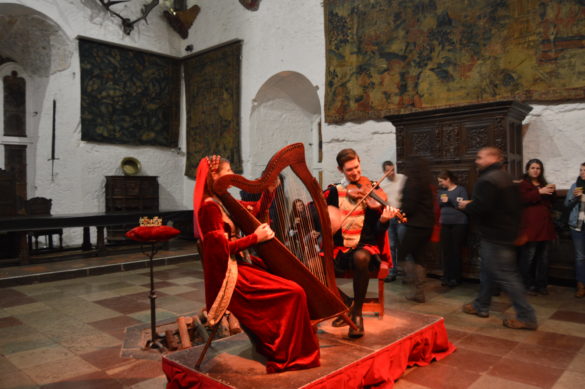 All told, that completes our whirlwind tour of Ireland! We flew out of Shannon the next morning. Seeing an airport, town and river with my name never gets old! 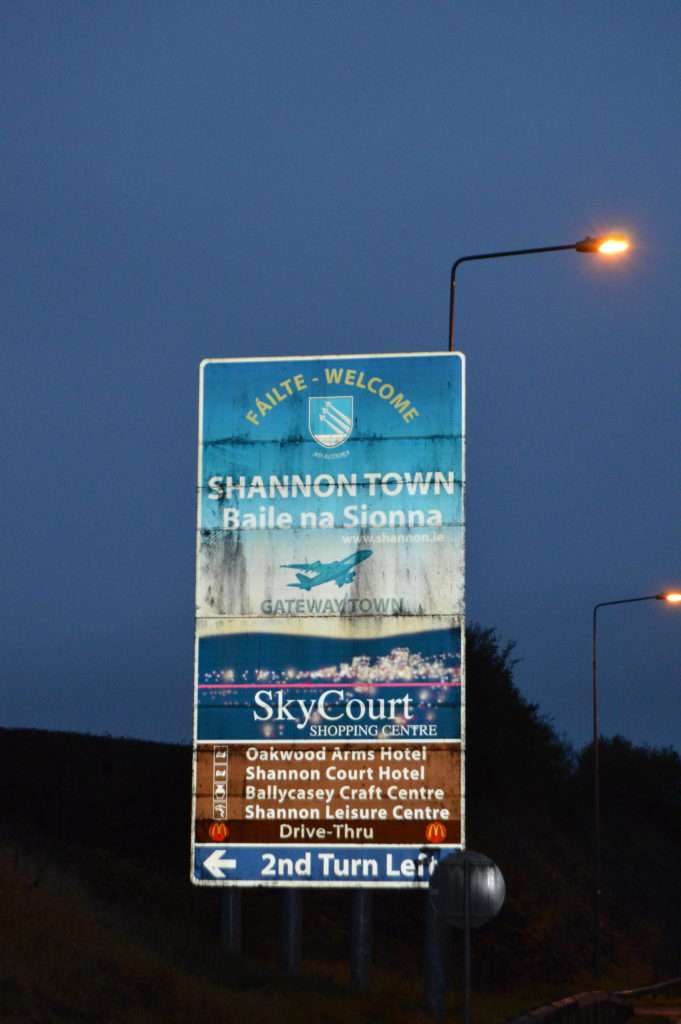 Ireland at Lightspeed- An Itinerary for the Truly Driven! (Part 2)

Solidarity with Paris for Notre Dame