How To Actually Visit the Vatican

Visiting the Vatican can be an exercise in frustration, or it can be an interesting, educational, or religious experience. Here are some tips to assist in making your trip pleasant, plus insight on a so-called ‘secret’ tour, in other words- how to actually visit the Vatican!

Buy your tickets in advance! The onsite ticket purchase line loops around multiple times inside, before stretching down the street outside (in the direct sun). With timed entrance tickets in hand, we waited about 10 minutes through the security process, but meanwhile those without tickets waited potentially hours just to get in the door.

During the online ticket purchase, Visa and MasterCard Capital One cards would not process, despite trying two different users’ cards, different days, times, and from different networks.  The Vatican helpline told us to call the credit card providers for a 3D Secure Code/Full Authentication, but Capital One said they did not have such a program. We were told they could setup a system to text a code to you for every online purchase. However, this would not help as there was no pop-up or spot for a code during the Vatican website purchase (double checked Javascript and pop up blockers to no avail). Finally we were able to process the purchase with a Visa debit card from our bank, without a code or extra security.

Once you’re there, be sure to go to the Vatican Museum entrance, as St. Peter’s is a decent walk and often where the taxis will deposit you.

There are a variety of Vatican ticketing options, but we opted for the general museum entrance. It’s the cheapest option, and with a guidebook, you’ll be fine. However, if crowds bother you, or you just really want to soak in the museum, I recommend The Out of Hours- Good Morning Vatican Tour. It begins at 6am, and there are only 20 people on the tour. You’ll be able to actually see the statues, art, and displays and most of all, you’ll see the Sistine Chapel without being herded along like cattle.

It’s hot! A/C is scarce, so my family fervently read this sign (several times) while hogging the A/C vent. 😉

Otherwise, if you’re not an early riser, are looking for the cheaper option, or didn’t book the Early Morning tour early enough, just have some patience. Many areas are not congested, while others, like the Gallery of Maps and Gallery of Tapestries are so crowded you literally shuffle along with your nose pressed to someone’s back. 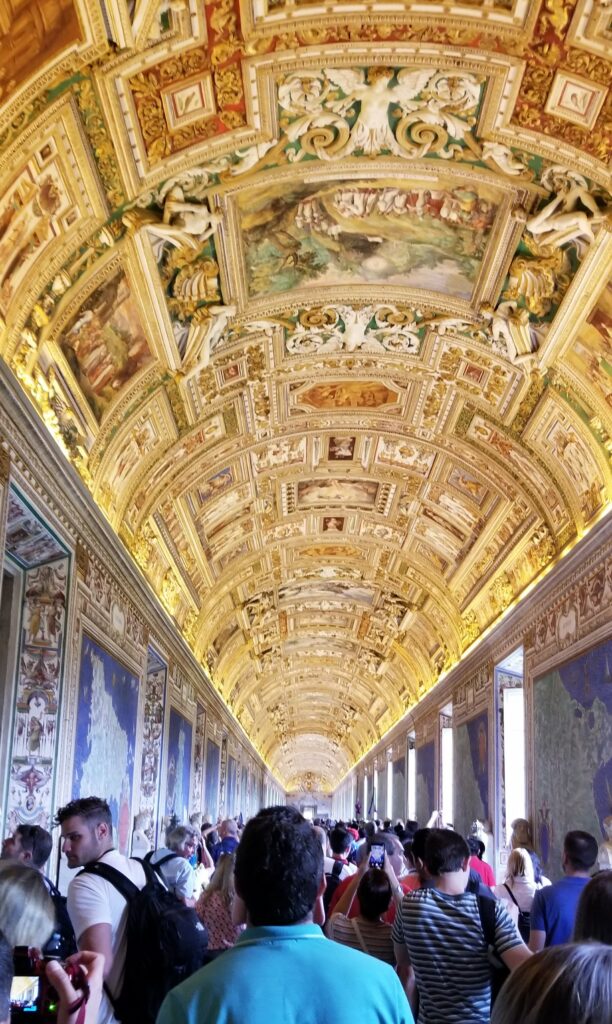 The Gregorian Egyptian Museum is a must for lovers of ancient history! The mummy displays were fascinating, including several preserved mummies and their sarcophagi, and numerous Egyptian statues.  The museum also contains some great Roman artifacts. For me, the most exciting was seeing Antinous’ statue as Osiris. The teenager lover of Emperor Hadrian drowned in the Nile River while the emperor’s court was touring Egypt. Hadrian, obsessed with all things Eastern, deified the young man and associated him with Osiris, the Egyptian god of death, resurrection and fertility. The statue, and many others of Antinous-Osiris have been found. This particular one came from Tivoli at Hadrian’s villa.

The Pio Clementino Museum contains hundreds of statues, ranging from Roman to Renaissance. I enjoyed the Round Hall, which included this bronze Hercules,  and the Hall of Animals.

The Gregorian Etruscan Museum was the least crowded, and showcased many pre-Roman artifacts, including an ancient chariot, preserved leather shoes and a breastplate.

Different areas of the museum close for maintenance, cleaning etc., so you’ll occasionally be routed along a different path, but almost everyone will pass through the aforementioned Galleries of Maps and Tapestries. I love maps, and those in the gallery are amazing. The tapestries are also great, my personal favorite the Assassination of Julius Caesar.

Shortly before the Sistine Chapel, you’ll pass a cafe serving mediocre food, but at least it’s a rest stop. You’ll then be pushed into the famous chapel. I was so excited to see it, but honestly, it was bit of a letdown. The amount of people is literally crushing, and you’ll be lucky to squeeze your way into the center, where you are allowed to stand and admire the art. The guards are screaming “NO photos” and yelling at the numerous tourists who attempt it anyway. Sure, it’s one of the greatest works of art in the world, but it feels like a circus. If you’re not part of a group, latch onto one and follow them through the door at the back of the chapel, which leads right into St. Peter’s Basilica. 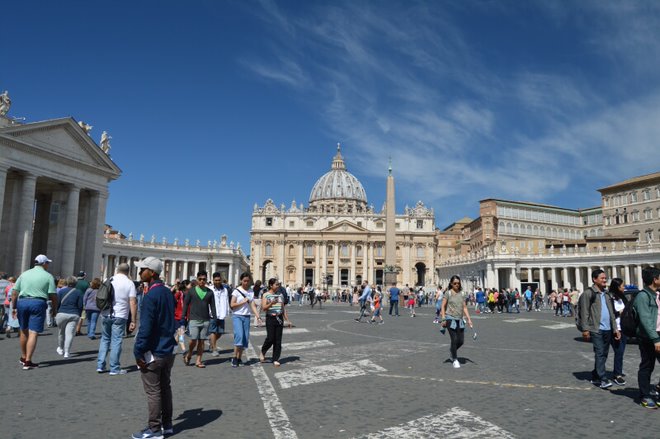 The Pope holds his public audience on Wednesdays, so St. Peter’s Square will be jammed packed. Unless you specifically want to see the Pope, I advise avoiding the area on Wednesdays.

The obelisk, standing in the center of the square, is one of the original Egyptian obelisks brought to Rome. This particular one arrived in 37 AD, under Nero, but it’s exact date of creation is unsure. It was erected in St. Peter’s Square in the 16th century.

The highlight of the square is, of course, St. Peter’s Basilica. The history of the church stretches back to the time of the apostles, when the Vatican area was a necropolis. Peter the Apostle was supposedly buried here, which led Emperor Constantine to build the first St. Peter’s Basilica over the ancient cemetery. His church was razed and replaced with the current structure in the 16th century.

Without a guide, you lose many finer points of St. Peter’s Basilica. The good news is, there are free tours offered by seminary students from the Pontifical North American College. These English tours are only available during the semester term, but check PNAC.org for details. The tours meet in the square, beside the statue of St. Peter, at 2:15pm Monday-Friday, with no fee and no reservations. 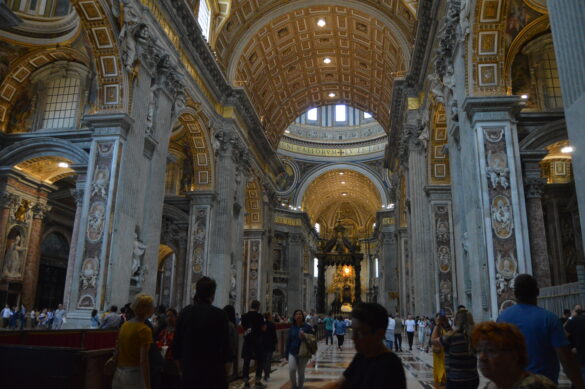 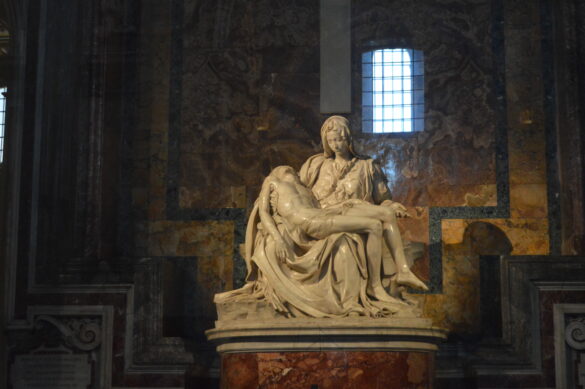 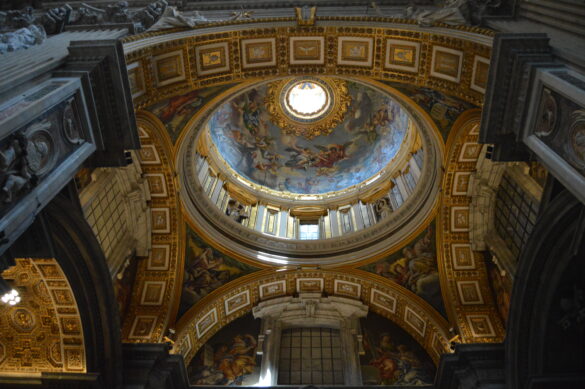 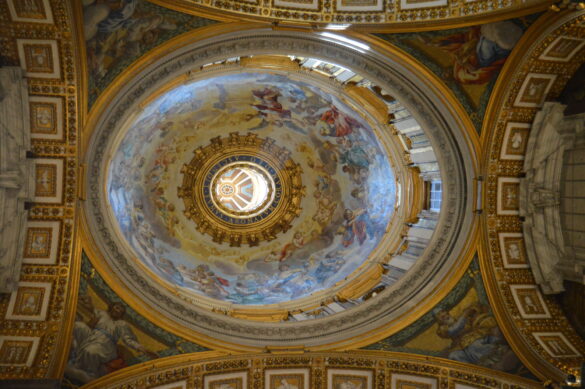 Of course, if you don’t want a guide or are in a hurry, just head on in. Expect a long, long line. It moves fairly quickly, but often extends all the way around the square. If you book the amazing Scavi Underground tour, discussed below, you get to skip this line entirely!

The famous Pieta statue, carved by Michelangelo in 1499, sits to the right upon entry. It depicts Mary holding the body of Jesus, after the crucifixion, and is probably one of the most recognizable statues in the world. It’s encased behind bulletproof glass, and has been since someone attached it with a hammer in the 1970s. The beautiful dome over the altar is generally attributed to Michelangelo as well, although numerous artists were involved over the years.

The high altar sits over the alleged location of St. Peter’s tomb, and you can see a small inscription and a window into the underground, if you look closely. As you walk around the church, you will notice several grates in the floor, providing glimpses into the subterranean area, which leads me to the Scavi Underground Tour. 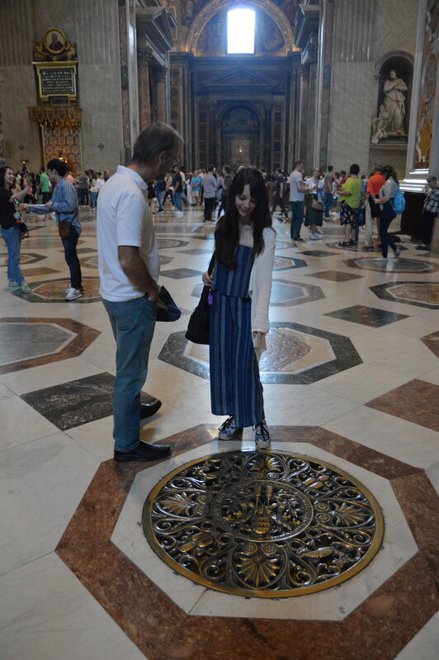 Hey look! We were down there!

This is one of the most exclusive access tours the average traveler could hope for, but you’ll need to plan well in advance. The Scavi Underground tour descends to the original necropolis level which was excavated beginning in the 1930s. The tour explores the ancient Roman burial ground, before arriving at the supposed burial place of St. Peter.

Tours are booked through the Vatican Excavations office at http://www.vatican.va/roman_curia/institutions_connected/uffscavi/documents/rc_ic_uffscavi_doc_gen-information_20090216_en.html.

You will be required to send an email to the address provided listing the number of participants, their names, preferred language, dates you are available for the tour, and an email address. The excavations office will then reply, providing a tour date and time to you, and a link for payment. As of 2019, the entrance was about $15 USD per person. Tours are limited to about 12 people, and all participants must be 15 years of age or older. As with churches, this is considered a sacred area and shoulders and knees must be covered.

The tour begins at the Scavi Office, located through a special security entrance. You’ll pass through airport style security, although there was no line, and walk past the Swiss Vatican guards. 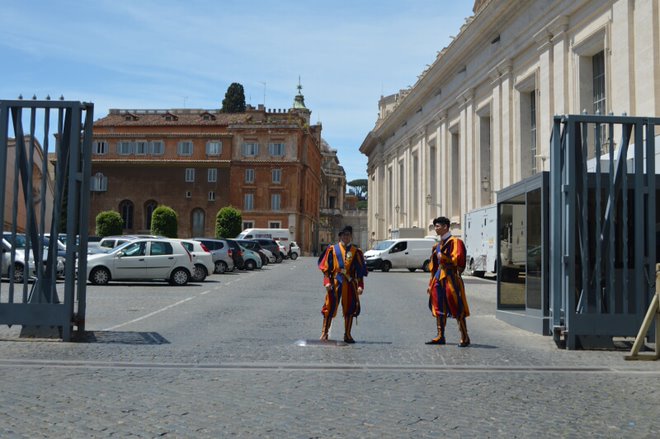 The tour lasts about 90 minutes, and be prepared for tight, cramped spaces and high humidity. Photos are strictly forbidden on the tour. It is so fascinating though! You will descend several levels underground, but at the first level, you’ll see the other side of the grates in the basilica’s floor, and hear the people overhead. As you continue downward, you will come to the oldest levels. The necropolis contains numerous pagan burials, complete with beautiful frescoes. A couple tombs are noted as Christian burial, for the signs engraved in the stone.

Your tour guide may point out the brick work, which actually denotes the era. The pre-Constantine bricks are very different than those from Constantine’s era. Aside from the construction of the bricks, it was common for the Roman builders to have an identifying stamp on their bricks. This is often how many ancient ruins have been dated. This reveals some intriguing information in the necropolis, however. Pause for the moment, and ask why St. Peter’s has been so important. There is a long and complicated answer to this question, but I will try to briefly summarize it. The Catholic church says the basilica was built over St. Peter’s tomb. How could they possibly know this? Well, in the mid 300s AD, Emperor Constantine believed Peter was buried at this location, and so built the first basilica. He was much closer to Peter’s time than we are today, yet why did he think this was the location? In 199 AD a Roman presbyter named Gaius wrote about the ‘trophies of the apostles’ (their relics) being located in the Vatican area. The Trophy of Gaius was discovered and dates to the late 100s (thanks bricks!), appearing to have been a shrine or tomb of sorts. It is thought to have been the first memorial on the basilica’s location. Nearby a broken piece of plaster was discovered with Greek writing, stating “Peter is here”. Old coins were found on the site, suggesting people had visited and venerated the site even earlier than that. So this tradition has been passed down and in the 1960s, further excavation revealed bones buried in the proposed spot. They were shown to be that of a man in his 60s, as Peter would have been at his death. Our tour guide provided a much more detailed explanation, but suffice to say, the Church maintains ‘they consider these to be the bones of Peter’. At the end of the tour, you will see a small hole with a light shining on the bones in question.

It’s a fascinating historical mystery, whether you buy into the church’s rhetoric or not. As you exit, you will be able to view one of the private papal chapels and the Vatican Grotto, which contains numerous papal burials. There are separate Grotto tours, so with the Scavi tour it’s a bit liking getting two for one! Finally, upon exiting the grotto, you will have immediate entry into St. Peter’s Basilica, cutting the mile long line! I can’t recommend this ‘secret’ tour highly enough, whether you are a history buff, a religious pilgrim, or just looking for an unusual experience. 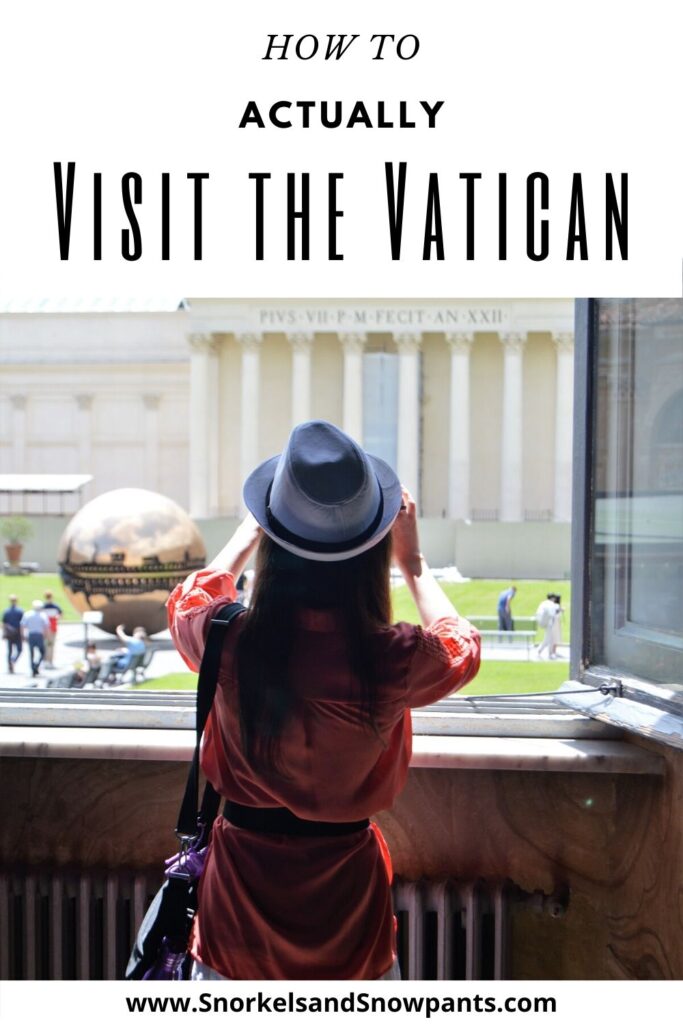 How to Visit Antelope Canyon and Horseshoe Bend

Is Roswell Worth Visiting?