A Few Days in Naples Italy

Naples, Italy is famous for its pizza, and as the gateway to Pompeii, Sorrento and the rest of the Amalfi Coast. It’s home to the National Archaeological Museum, which contains many of the Pompeiian treasure. The city has also been called rough, dirty and dangerous.

So what it is- cultural center or a city to be avoided?

I stayed in Naples for 2.5 days for the purpose of visiting Pompeii, Herculaneum and Mt. Vesuvius. I was coming from Venice, and it was an easy, direct 5 hour journey on the highspeed Italo rail. I figured it would be nice to see another city, en route to Rome. I rented an AirBnB that was close to Garibaldi Station, not far off the Piazza Garibaldi, thinking that would make for easier commutes, plus the rental was only €81 a night.

When we arrived, it was raining as we hauled our suitcases towards the apartment, following the landlady’s directions. They were spot on, but when I realized that was the building, and this was the neighborhood, my first thought was ‘No, this can’t be!”. There was trash piled everywhere, and we had passed several piles of human excrement, both near the train station and along the sidewalk to the apartment. With a sinking feeling, we stood staring up at the building for a few moments before the windows were thrown open and a jovial Italian lady leaned out, calling to us. Yep, this was the right place. 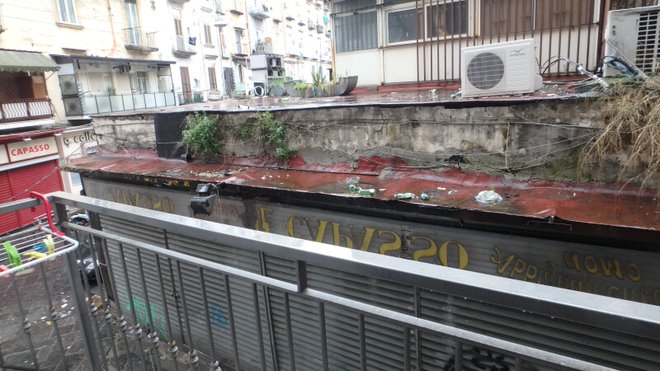 Trash even on the rooftops

Well, the rental itself was quite nice. In fact, it felt like a haven from the dirty scene outside the front door. I won’t recommend it though, based on the neighborhood and some issues with the apartment. During our second night there, we were all awaken by gunfire. At first we thought perhaps it was firecrackers, but as it continued for a few minutes we confirmed it was indeed guns. It didn’t last too long and stopped after that point, so I have no idea what it was about.

We decided to take the metro to the Port, which would hopefully be an improvement. I was a bit afraid to take it, considering what I had seen on the street level. However, a full day metro ticket is only €4.50. while a 90 minute ticket is €1.50. 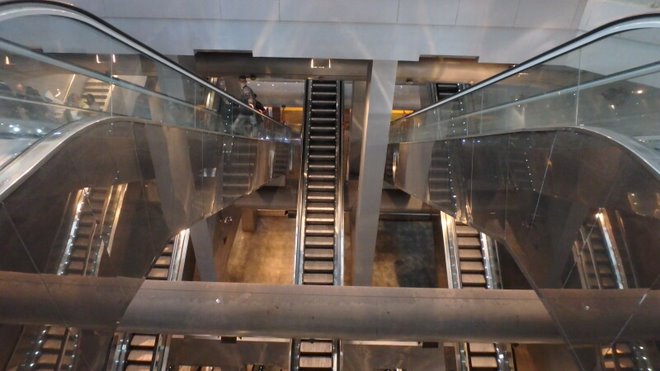 The metro station is next to the Central Station, and I literally felt like I had been transported to a different world when I took the escalator down to the metro station. It was clean and updated, with nice shops and a few cute restaurants. There were armed guards at the escalator entrance, presumably to maintain the order. As it turns out, the Naples Metro is something of an anomaly. It’s keep spotless clean, performers and panhandlers are banned, and each station has unique art. In fact, the Toledo Metro Station has won multiple awards for being the most beautiful train station in Europe! If you get a chance, check it out! Meanwhile, the Municipio has some neat art of it’s own, and is the closest stop to the Port and waterfront. 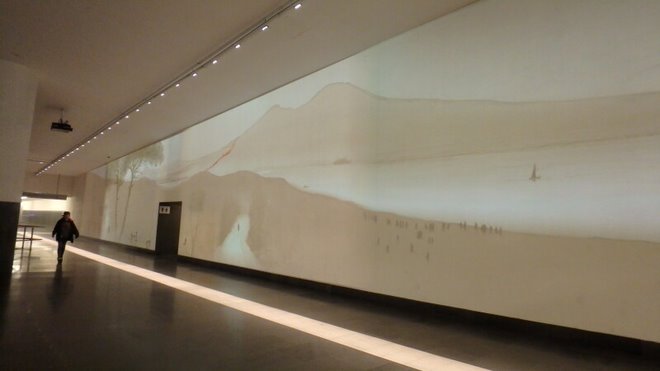 As soon as we exited the Metro into this area, it was a radical change from our neighborhood.

This castle is only about a block from the Municipio Station. Entry is €6, open Monday-Saturday. We visited on Sunday, so couldn’t enter the castle. It’s name, New Castle, distinguished it from the Castel dell’Ovo. Even so, the ‘new’ castle was built in the 13th century. 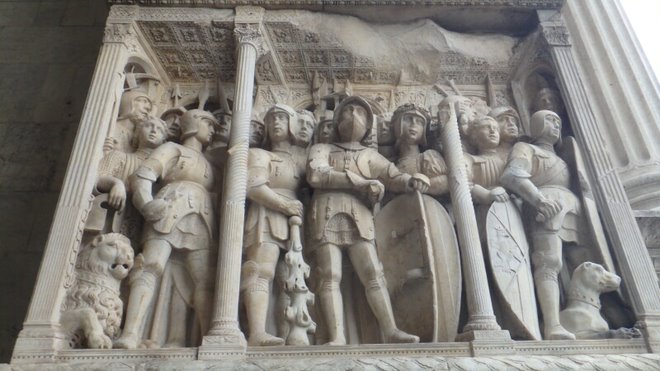 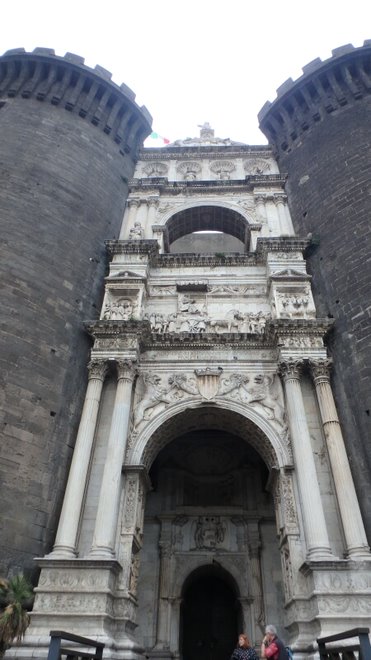 Between the Castles- Major Sites

Many of the major Neapolitan sites are located on this pleasant walk between Castel Nuovo and Castel dell’Ovo.

Continuing past the castle, you will come to the opera, Teatro di San Carlo. Built in 1737, it’s an impressive opera. They offer guided tours seven days a week, six times a day, barring any closures or performances. It is actually connected to the Royal Palace of Naples, the Palazzo Reale, although there is no public pass through. The Palace is open to the public.

Just across the street is the Galleria Umberto I. This 19th century promenade houses shops and cafes under a beautiful gallery. Most places within it are closed on Sundays though, and during our rainy, chilly visit, it seemed to be the hideaway for the homeless population.

Around the corner is the Piazza del Plebiscito, a 19th century piazza, anchored on one side by the Basilica San Francesco di Paolo, and the Royal Palace in the front. It’s a fun place for people watching! If you continue past it, along the palace’s outer wall, observe the statues set back into niches. These eight statues depict various kings of Naples, in chronological order. As they progress, you’ll notice the change in garb based on the century, as the first one is Roger the Norman (12th century), ending with Victor Emmanuel II (19th century). 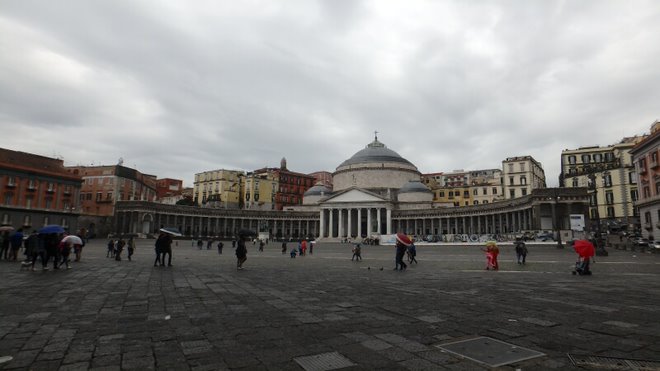 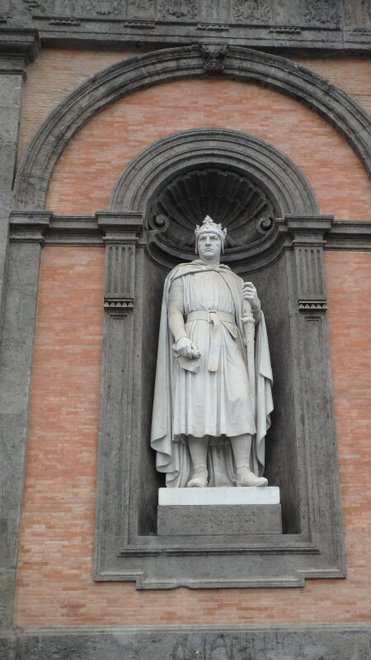 The sidewalk then opens up to a waterfront promenade, with beautiful views of Mt. Vesuvius. A number of restaurants and high-end hotels line the waterfront. It’s a nice stroll to the Castel dell’Ovo. 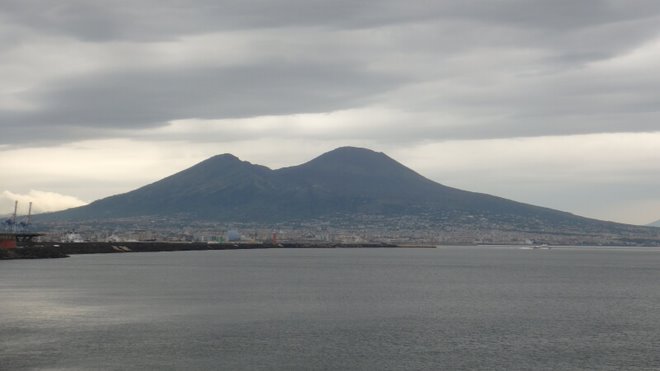 Mt. Vesuvius across the Gulf of Naples

Built in the 12th century, this castle is open 7 days a week, with free entry. It has a long, storied history! Allegedly, some fortifications have stood here since the 6th century BC, which lead to the legend of the Roman poet Virgil hiding an egg in the castle’s basement. As the legend goes, so long as the egg was protected, the castle would never fall.

A nice promenade leads out to the castle, whose base is surrounded by waterfront restaurants and a marina. During our visit, all of the restaurants were closed for private family events. 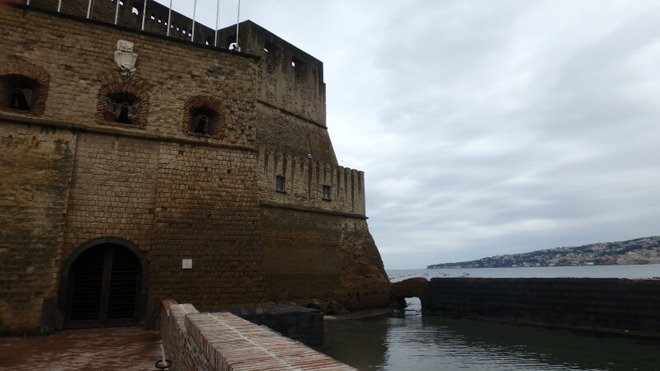 After the trek to Castel dell’Ovo and scouting all the restaurants, we were pretty famished. Of course, being about 4-5pm, most eateries were closed, not opening until 7pm for dinner.

The only place we could find was called Pizza e Motori, It’s on the waterfront too, with indoor and outdoor seating. It recently stopped raining, so we sat inside, in the large window. We had a lovely view of Mt. Vesusvius in one direction, and Capri in the other.

All the food was decent, a few items even very good! After coming out of our food delirium, we realized the other side of the restaurant was filled with cars! As the name suggests, it’s all about pizza and cars- a restaurant doubling as a car dealership! Only in Italy!

Yes, Naples is home to the National Archaeological Museum, but it also has a few more unusual museums too. After an amazing day at Pompeii and Herculaneum, we wanted to visit the national museum the next day. However, they are closed on Tuesdays!

This small museum offers something totally different, and is just €5. The museum displays torture devices, with full explanations in several languages, from the 16th-18th century, plus a number of more modern recreations. Many of the pieces have dummies, demonstrating how they would have been used. One of the key focuses is to highlight Naples’ resistance to the Inquisition.

Devices range from this medieval thumbscrew to the garrota, a method of suffocation used in Spain until 1975. 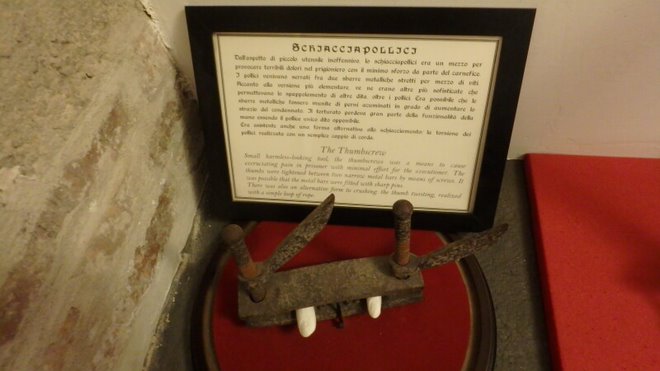 Not far from the Torture Museum sits the University of Naples Federico II, founded in 1224. It houses the Museum Center of Natural and Physical Sciences, which is actually five small museums, each focused on a particular area of science- mineralogical, zoological, anthropological, paleontological, and physics!

The Paleontology Museum sits by itself, instituted in 1801, within the former monasteries of Santi Marcellino e Festo. It’s small, but a neat stop, especially for children or overgrown kids like us. Many of the signs are only in Italian, though, so be ready to translate if you want the displays’ specifics. The museum has a peaceful garden too, surrounded by the cloisters. 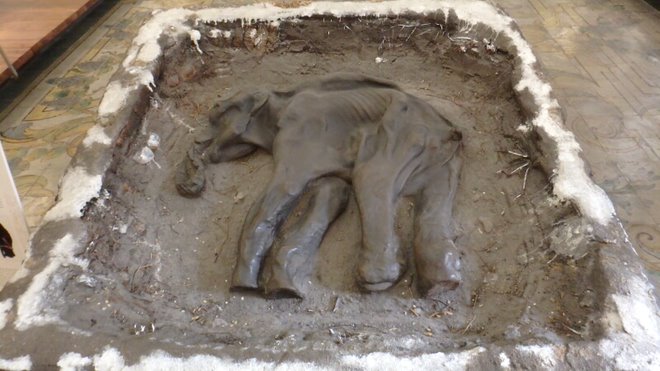 While Naples was the dirtiest, grittiest Italian destination I’ve visited, in fact the filthiest first world city I’ve visited, I was struck by a few thoughts. I would never walk through our apartment’s neighborhood alone, and I admit I clutched my slash proof purse closer as the questionable looking locals raced by. Yet, none of them bothered us. No one stopped us, begged for money or tried to scam us. Sure, we were all dodging piles of trash and literal crap in the street or sidewalks, but everyone kept to themselves.

Meanwhile in Venice and Rome, you’ll be accosted, harangued, and followed after. The police often intervene and shoo the pesty panhandlers away from tourists. At the restaurants you’ll wait in line for an hour to eat €25 often mediocre pasta and then barely avoid being run over by any one of the dozens of tour buses as you leave. Don’t get me wrong, I loved Italy, but tourist traps abound!

So what constitutes the “real” Italy? In many ways, I felt I had a truer local experience in Naples than I ever had in Venice, or even Rome. In some ways, it’s hard to describe. The Neapolitans drive like bats out of hell, but they’ll slam on the brakes and wave pedestrians through at a crosswalk. The waterfront restaurants along the Castel dell’Ovo were closed for huge family gatherings Sunday afternoon for kids’ Confirmations. I ate delicious, crazy cheap food in Naples. I had the most amazing €6 pasta with €1 vino in the upstairs of a tiny, unfancy restaurant I would normally have been afraid to eat in, just down the street from our apartment. At another small eatery, I laughed with a restaurant owner as I tried to order takeaway in broken Italian, until he called over his 10 year old grandson who spoke English.

So in the end, I suppose your perception of Naples will be based on what it is you’re seeking. It’s a hectic and sometimes sketchy city, but the food and wine are great and cheap, there are many, many sites to see, and it’s a great starting point for a journey southward. 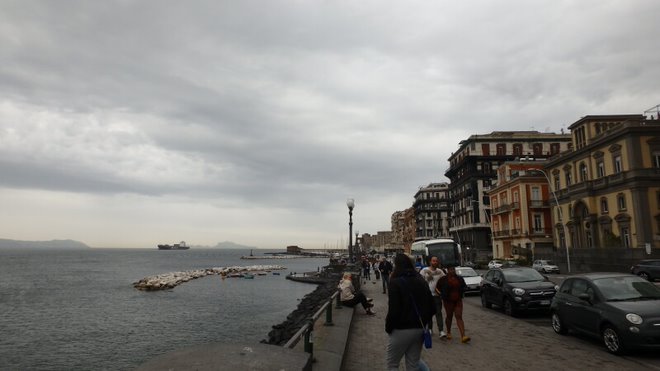 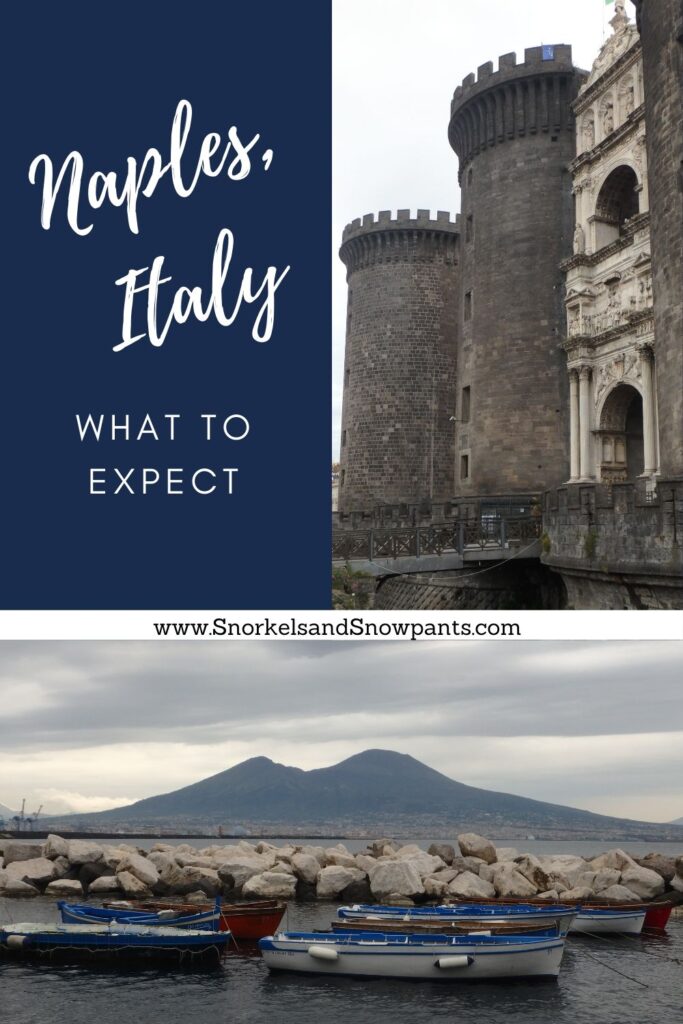 Pompeii and Herculaneum In a Day- It Can be Done!

How to Visit Antelope Canyon and Horseshoe Bend

Is Roswell Worth Visiting?