Pompeii and Herculaneum In a Day- It Can be Done!

Pompeii is one of the most famous ancient landmarks, with it’s often overlooked sister, Herculaneum (Ercolano). In preparing for my visit, I assumed doing both in one day was too much, plus I wanted to climb Mt. Vesuvius. Well, my planned day turned into quite a random adventure, and proof that you can in fact visit both sites in one day!

We stayed in Naples for 2.5 days for the purpose of visiting Pompeii. It’s an easy journey to both Herculaneum and Pompeii, from Naples Central Station. The Circumvesuviana line runs to Sorrento and is an unfancy but easy railsystem. Often covered in graffiti on the outside, the interior is worn but clean enough. We found seats on all but one connection, which was standing room only.

We took the Circumvesuviana line from Naples for about €5 to Ercolano Scavi, with the intent of climbing Mt. Vesuvius.  The Vesuvius Express bus departs from in front of the Scavi train station, with the ticket office to the left, as you exit. Roundtrip tickets are €20 and include admission to Mt. Vesuvius National Park. Our bus was delayed, waiting out a torrential thunderstorm. The rain finally stopped, and off we went up the mountain. It’s about a 30 minute ride, has some sharp, twisting curves, and is nearly impassible when two buses meet head on, as ours did, in the rain. However, it’s not bad, and far from the worst mountain road I’ve driven. 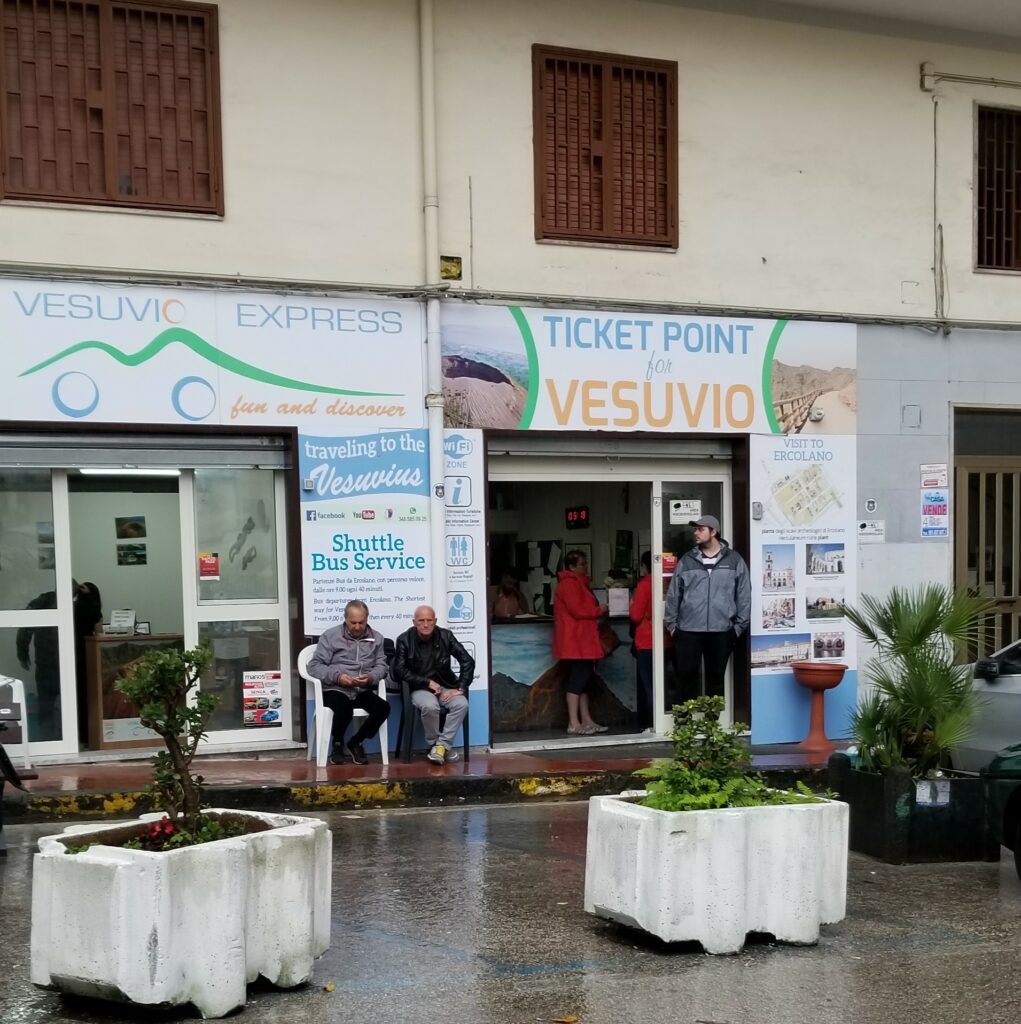 Sadly, we got to the park entrance, only to be turned away. Evidently, the strong storms washed out the trail to the summit, and the park was closed until further notice. We went right back down the mountain. Vesuvius Express issued a refund for the park admission (€10).

A bit discouraged, we were at least glad to see the sun come out in Herculaneum. The restaurants are largely tourist traps, complete with waiters dancing on the street with their menus. We ate an early lunch at Pizzeria Luna Caprese, which serves delicious pizza straight from their coal fired oven.

The family running the restaurant is very kind and friendly, but at the time didn’t accept credit cards despite the Visa sticker in the window. Luckily, we had cash.

It’s a fair walk from the train station, down the main street, past the pizzeria, to the gates of the ruins at Herculaneum. Entry was easy, and the welcome cat was sitting on the ticket counter greeting everyone!

With Mt. Vesuvius off the table, we allotted just 90 minutes to see Herculaneum, as we decided to continue on to Pompeii afterwards. There are guided tours and audio guides, but we just used the free guide booklet. I felt like we saw everything in 90 minutes, but would’ve enjoyed a tour. Only a small portion of the city has been excavated, roughly 11  of the supposed 49 acres. However, it is not the size of Herculaneum which makes it so unique.

While Pompeii was covered in volcanic ash, Herculaneum was encased in super heated mud and liquefied rock. This means while there are no hollow body casts such as made Pompeii so famous, there were perfectly preserved frescoes, original wooden stairs, organic plant matter and fabric- 2,000 years old!

During excavations in the 1980s, a preserved boat was found at the original harbor, along with over 300 skeletons. It revealed residents attempting to flee by water, most likely killed by the heat. This is interesting as it shows how far the current coastline is from that in 79 AD. They estimate the eruption added 0.2 miles to the coast’s width. 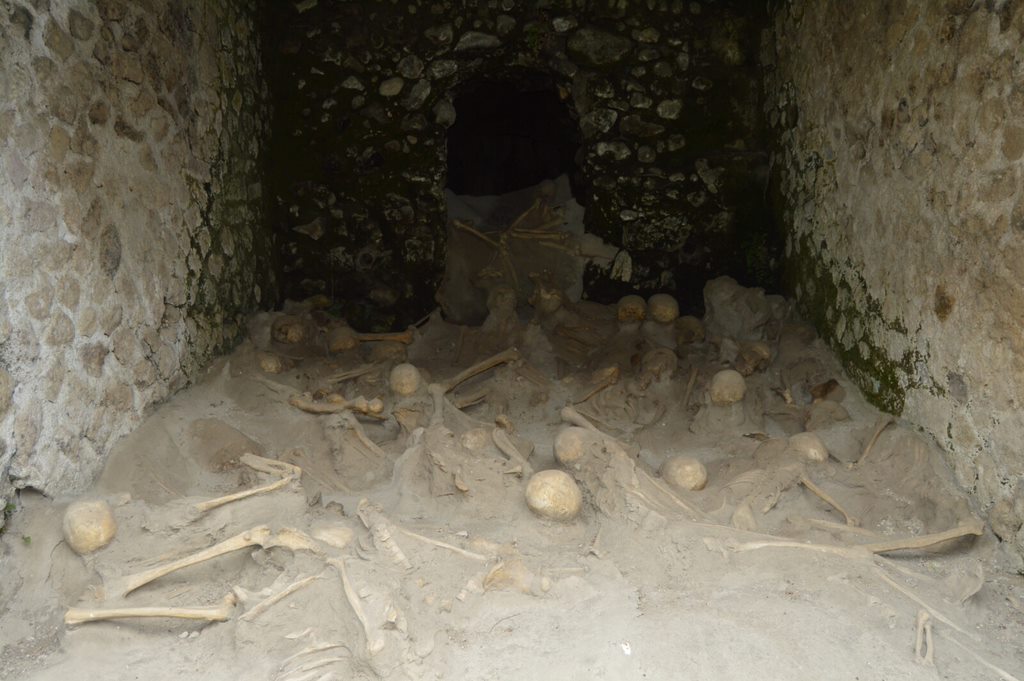 Victims’ skeletons under the Barrel Arches

The ruins are surrounded by the modern city of Ercolano, but when you descend into street level you don’t really notice that. Mt. Vesuvius looms in the background, although it was mostly covered in clouds during our visit.

Personal favorite: Hall of the Augustals. The meeting place of the Augustals, freed slaves who worshipped Augustus, this structure was dedicated to the Emperor while he was still alive, dating it to sometime between 27 BC and 14 AD. During my visit, they were actively preserving the frescoes, which depict Hercules, Jupiter, Juno and Minerva. 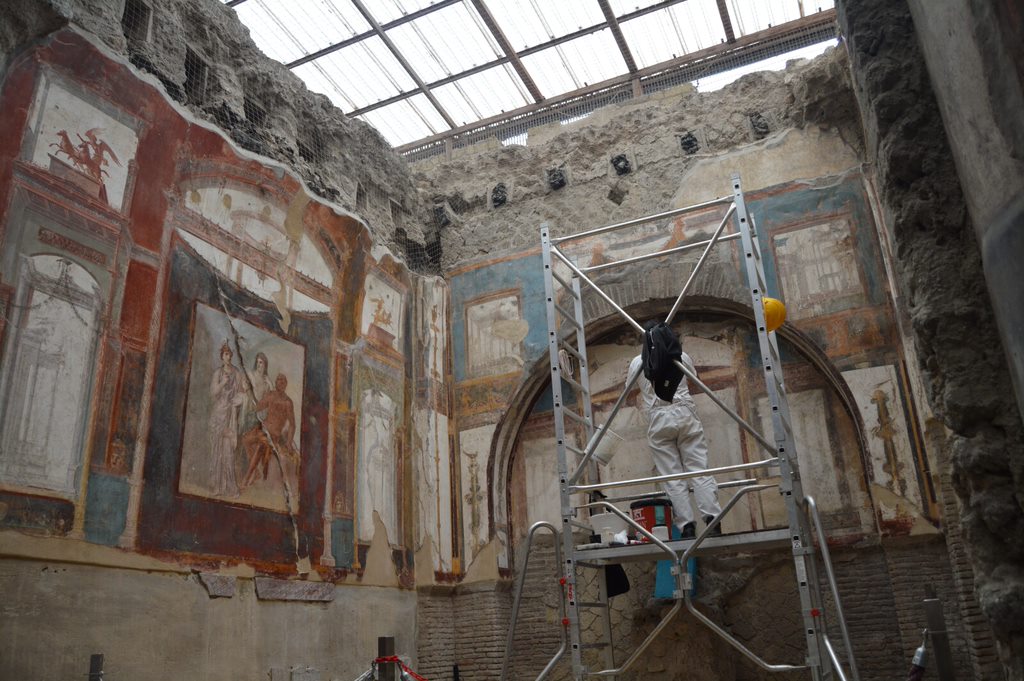 The Ruins of Pompeii

Continue to Pompeii from Ercolano Scavi on the Circumvesuviana train. Tickets are €2. The train arrives almost directly in front of the Pompeii Archaeological Park. Purchase your tickets, and if you don’t have a guide, be sure to rent the audio guide for €8. It has more information than you will have time for! It was helpful, but I would honestly recommend an experienced guide.

While flat shoes are a good idea in Herculaneum, they are an absolute necessity in Pompeii! I recommend a pair with good traction. The stone street up the hill into the park is fairly steep and can be quite slippery in spots!

We arrived about 4pm, giving us 3.5 hours til closing. It was late May, and the crowds were minimal. While that is not nearly enough time to explore the entire city, it gave us ample time to see highlights, plus we avoided the overwhelming crowds.

I loved Pompeii! I could easily spend all day there, and will definitely revisit on my next trip to Italy. Until you’re there, it’s hard to grasp the grandeur and expansiveness of the city, sprawling over nine districts. Roman history is one of my favorite time periods, and I felt the stories spring to life among the ruins. Pompeii is often cited for its brothels and phallic imagery, both of which are prevalent. However, there is so much more beyond that. The Terme Stabiane (Stabian Baths), the Basilica, the amphitheater, the temples, and of course, the plaster casts of the victims, all point to an ancient, vibrant city, all silenced in a matter of hours. It’s sobering, yet also awe inspiring.

Keeping in mind most of the original plaster casts of the victims are housed in museums, you can still see replicas onsite. Upon climbing the steep entry path, there is a small museum on the right side. During my May 2019 visit, it housed three victim casts. During the eruption in 79 AD, the bodies were covered in volcanic ash, and as they decayed, their forms left behind the imprint. During excavations of 1860s, the researchers, wondering what the vacant spaces were, filled the voids with plaster and soon discovered the human outlines.

The Basilica– dating to 130-120 BC, this portion of the Forum was essentially where government met. Legal cases were reviewed, laws passed and so forth. Before I visited Pompeii, I associated a basilica with a church. However, the term pre-dates Christianity and in Rome simply meant a rectangular building, usually flanked by columns, and came to be associated with law or business. 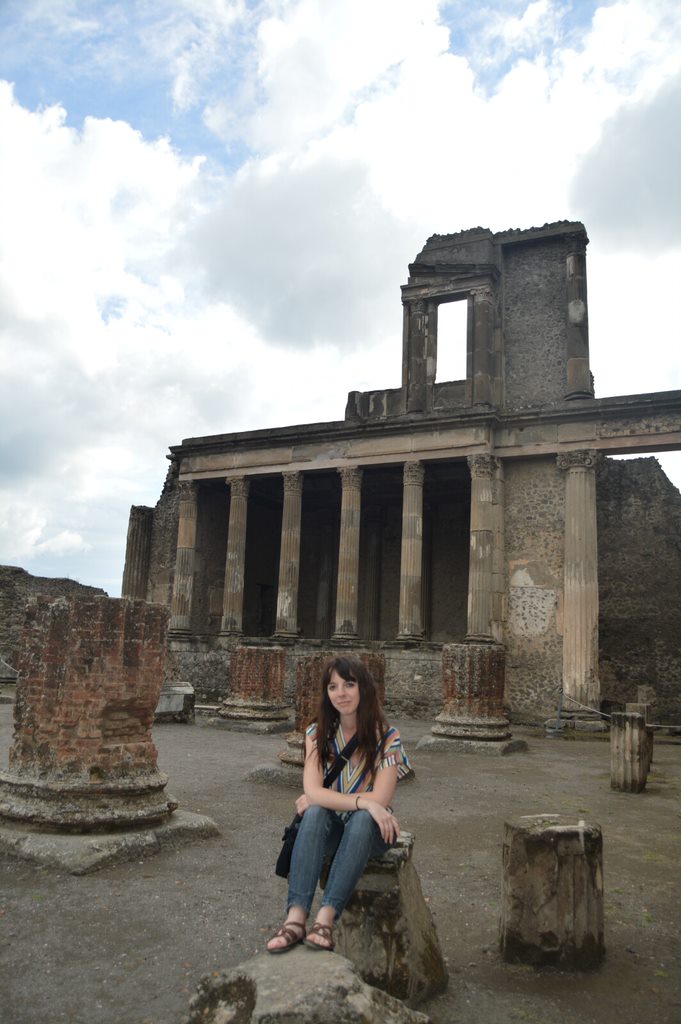 Sitting in the basilica

Terme Stabiane– built sometime in the 2nd century BC, the baths were quintessentially Roman. So much more than just baths, they would have been a center of social life. The Romans visited the baths to gossip, exercise, relax, and clean up. The baths have a large courtyard, where various games and sports would’ve taken place. Some beautiful frescoes remain, and you can see the wall cubbies where guests would’ve stored their belongings. 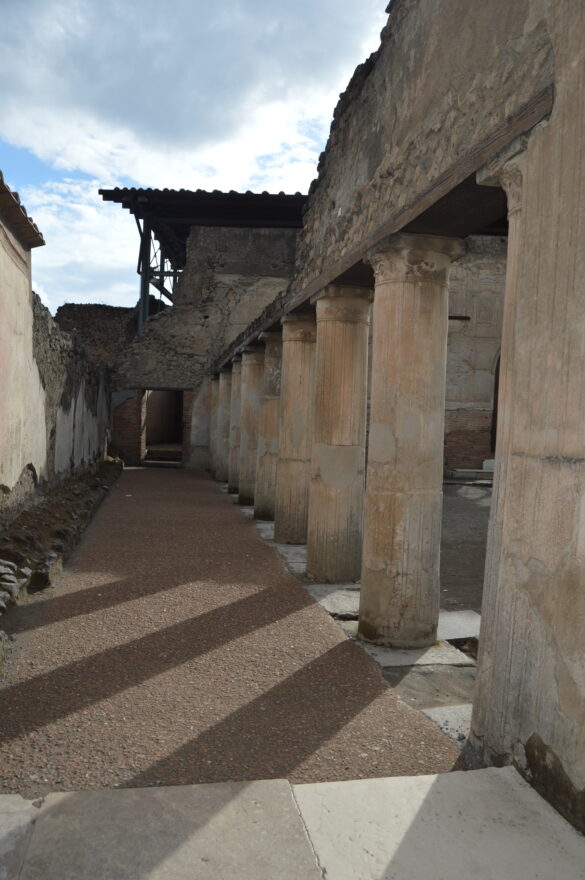 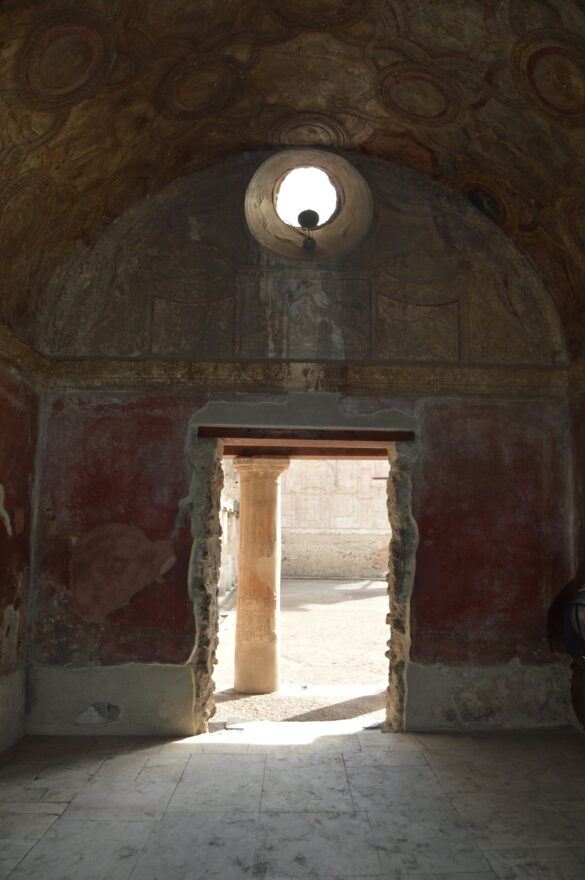 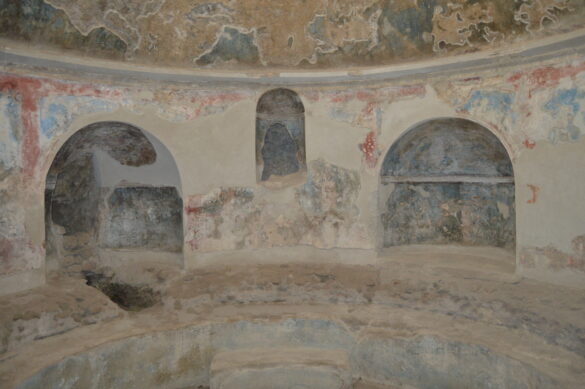 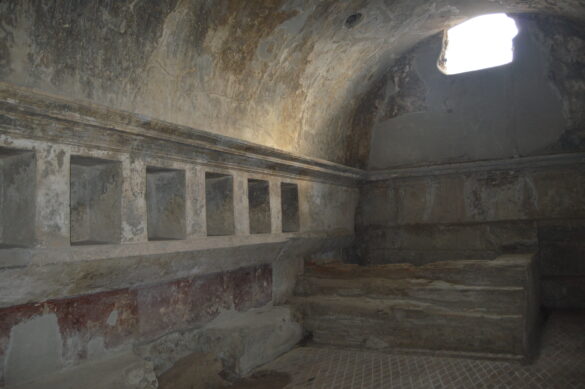 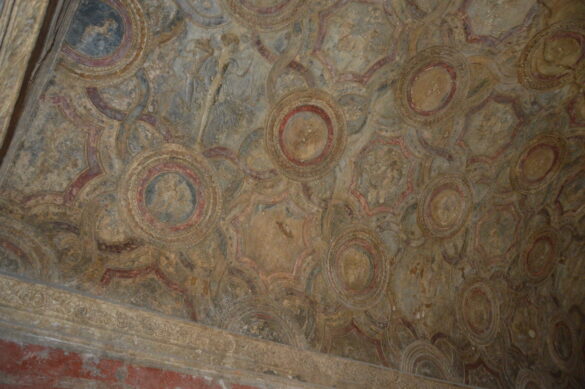 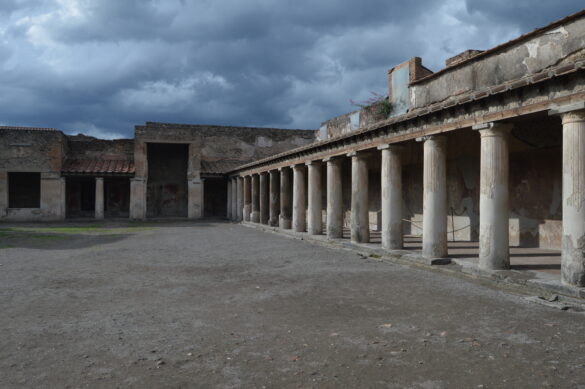 The Amphitheater– set back down a tree lined avenue, flanked by the exclusive vineyard of Villa dei Misteri, the amphitheater doesn’t appear accessible on first glance. However, there are entrances on both sides, and you can walk onto the floor, and under the seating. Perhaps I’m a bit biased since the only other amphitheater I visited was the Colosseum, but I liked it so much because we could actually stand in the center (and pretend to be gladiators!). 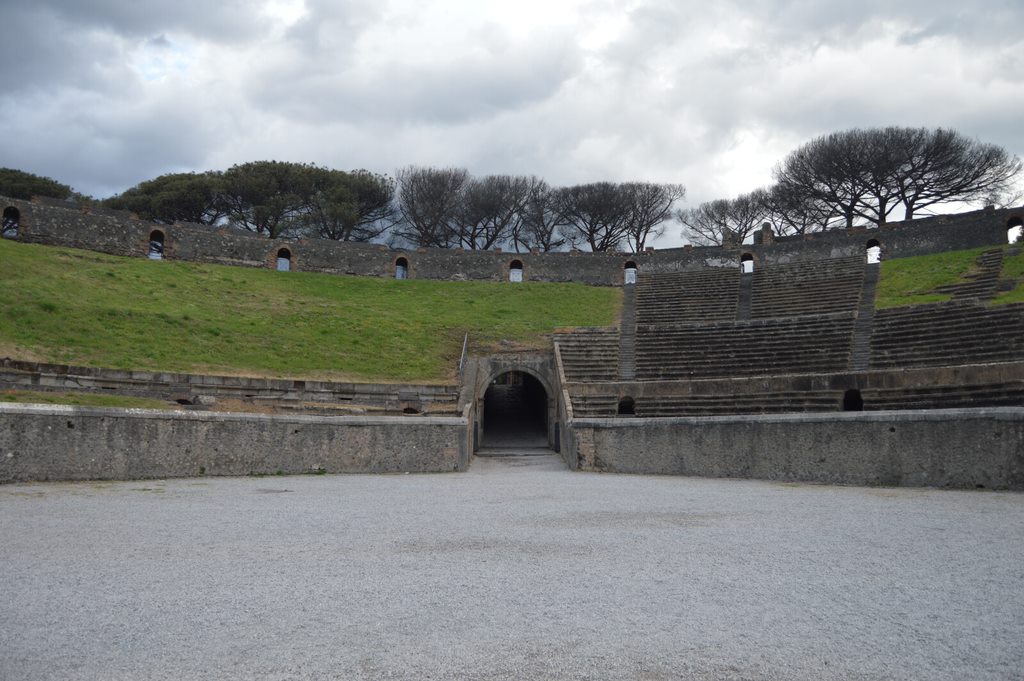 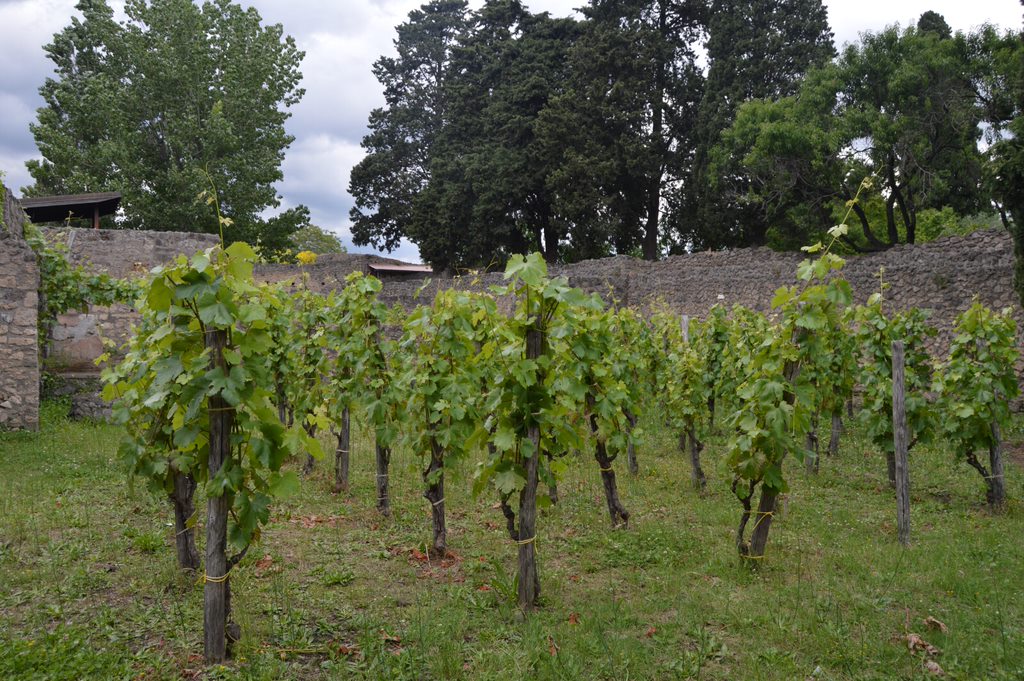 Villa dei Misteri Winery sits where the 79 AD vineyard did. A bottle of this exclusive wine runs about $200.

We left just at 7:30, official closing time, but there were quite a few more people still milling around inside. The train back to Pompeii arrived about 20 minutes late, but got us to Naples in roughly 45 minutes. All in all, we had a full day with a late morning start. We didn’t arrive at the Vesuvius Express until around 10am and had a leisurely lunch at the pizzeria, so if you started earlier in the morning, didn’t lose 1.5 hours on the bus up the mountain and had a quick lunch, you could easily see both Pompeii and Herculaneum without a rush. If you’re feeling particularly adventurous, you might yet squeeze in a quick hike up Vesuvius too! 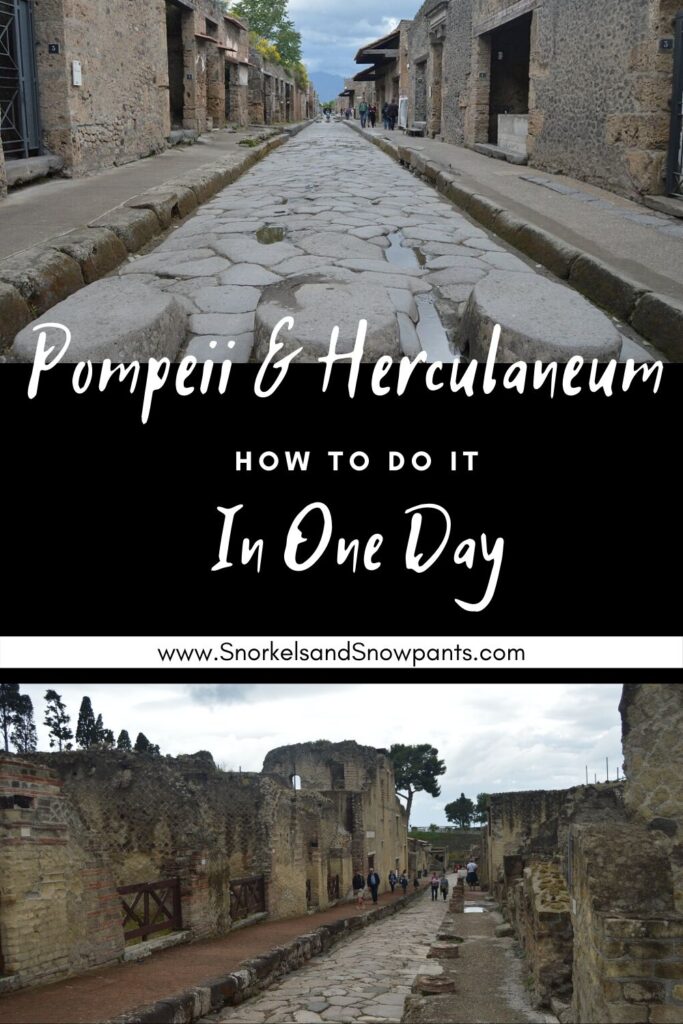 Venice, Italy- A Bit of This, a Bit of That

A Few Days in Naples Italy

I visited Pompei so so many years ago, and never went back to see Herculaneum, though I’ve always wanted to do so. Thanks for this post, it brought a lot of great memories from the times I lived in Italy

Thanks Gabi! Here’s to many more return trips to Italy!

Spot on with thiks write-up, I really believe this web site needs a lot more attention. I’ll probably be returning to read more,
thnks for the information!

This design is incredible! You obviously know how to keep a eader amused.

Between your wit and your videos, I was almost moved to start
my own blog (well, almost…HaHa!) Fantastic job.

I really loved what you had to say, and more than that, how you presented it.
Too cool!

Thank you so much! If you want to blog, do it! I put it off for far too long and am glad I finally got on the ball.