London on a Layover

I never pass up an opportunity to explore, even if I only have a few hours! So, when I booked our flights to Norway, I was thrilled to discover a 7 hour and 40 minute layover at London Gatwick on our return trip. Booking European travel, you’ll often find the cheapest flights also include long layovers in international cities. For many, an 8-20 hour layover is a nightmare but it’s a travel fanatic’s dream come true! This time, it was great consolation prize for having to return home, a trip extension after 10 days in Norway, a last hurrah before returning to reality.

London on a Layover-Can It Be Done? Yes!

Can you see all of London in 8 hours? No way! Can you get a taste? You bet! Before booking the flight with the London layover, I read extensively as to whether a city jaunt was reasonable and posted on travel forums, receiving mostly positive responses. I did my homework before I left the airport, or even my house, for that matter!

Gatwick has two terminals- north and south. Determine which terminal you’ll arrive at, and then purchase Premium Passport Control and Premium Security. These two luxuries will expedite you through passport control upon arrival, and through security on your return. At £10 and £5 respectively, they’re minor costs that will save you invaluable time during a short visit. At Passport Control, we skipped a hundred  or more people and went straight through. Premium Passport Control has its own lane, and we were the only ones in it! Purchase in advance online, and be sure to bring a printed copy.

Despite the huge and sprawling nature of London, it’s easily reached from both Gatwick and Heathrow. Both airports offer express trains into the heart of the city. The Heathrow Express ends at Paddington Station, while the Gatwick Express ends conveniently at Victoria Station. We took the latter, so I’ll concentrate on it. The Gatwick Express arrives in about 30 minutes, and runs 4 times hourly. Tickets can be purchased in advance, or at the ticket booths. We traveled on Saturday, an off-peak time, and the roundtrip was about £30. There are local trains which are much cheaper, but for a short layover trip, the Express is worth the extra money.

Upon arriving at Victoria Station, you’re at an underground hub, but also within a short walk of multiple landmarks. 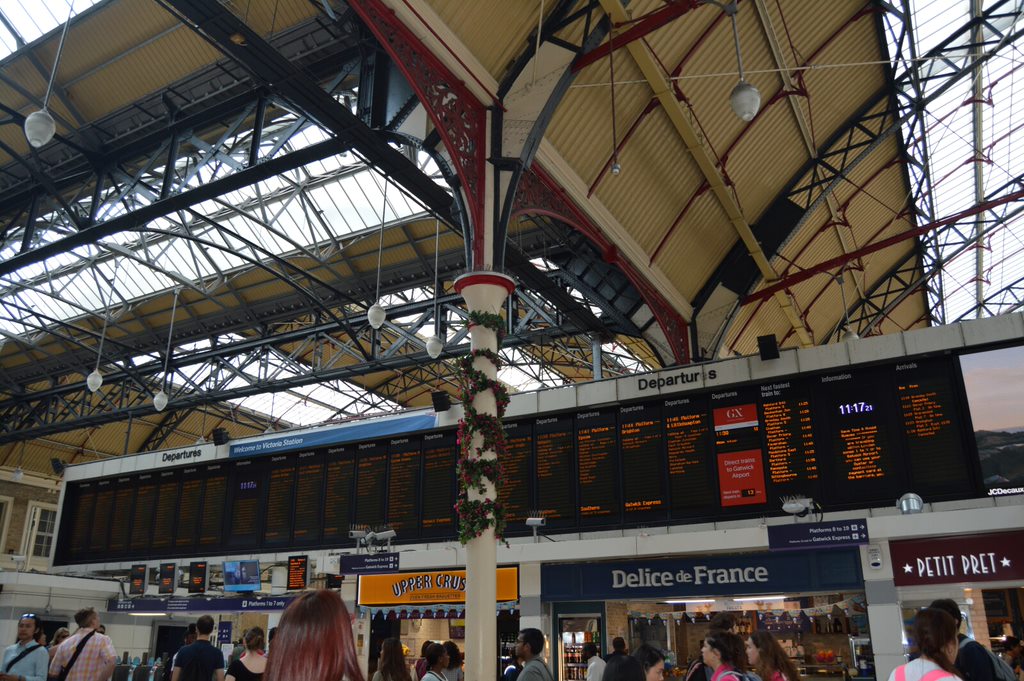 So what can you do in roughly 5.5 hours, accounting for 30 minutes return journey and at least 30 minutes to reach your gate? I’ll tell you what we did, which was the safe option. Of course, for the more daring, there are a few other options I’ll mention.

The abbey is a straight shot from Victoria Station, easily walked. You’ll also pass Westminster Cathedral along the way, not to be confused with the abbey. The cathedral is actually the seat of the Catholic church in England, while the abbey is an Anglican church.

Originally built in 1065, then rebuilt in 1269, Westminster Abbey has held every royal coronation since William the Conqueror in 1066. Every famous British king or queen has ties to this place, from Edward the Confessor, to Henry VII, first of the Tudors, to Queen Elizabeth and so on. It’s a treasure trove, a mecca for history nerds like myself. Certain figures leap from the pages of history, becoming as real today as they were 800 years ago. Reading about them, I feel as though I knew them personally. So, walking through Westminster is like visiting old friends. There’s my buddy, Geoffrey Chaucer, and my other friend, Anne Neville. A little crazy… I don’t think so, though my enthusiastic picture below might suggest otherwise. 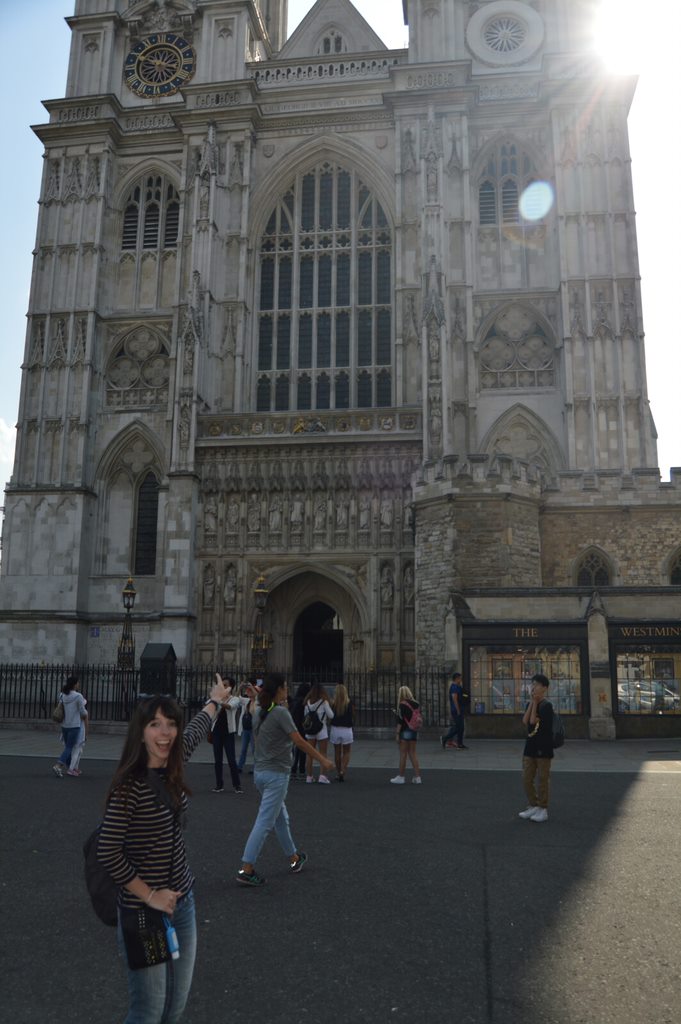 History rant aside, be sure to to purchase your entrance ticket in advance! Tickets are issued by date within a specific time frame. Without a timed entry, you’ll likely wait an hour or more before you even reach security, and you’ll never be able to see the abbey on a layover visit! During our quick visit in July, the ticket line extended down the sidewalk.

Audio tours are included in your admission price, but guided tours are available for an additional £7. These cannot be reserved in advance, but must be requested at your arrival. Sadly, photography is not allowed.

The Cellarium is a good spot for a quick bite, offering reasonable and tasty food in atmospheric surroundings. The abbey’s cafe sits within the cellars, but also has a lovely glass roofed terrace. 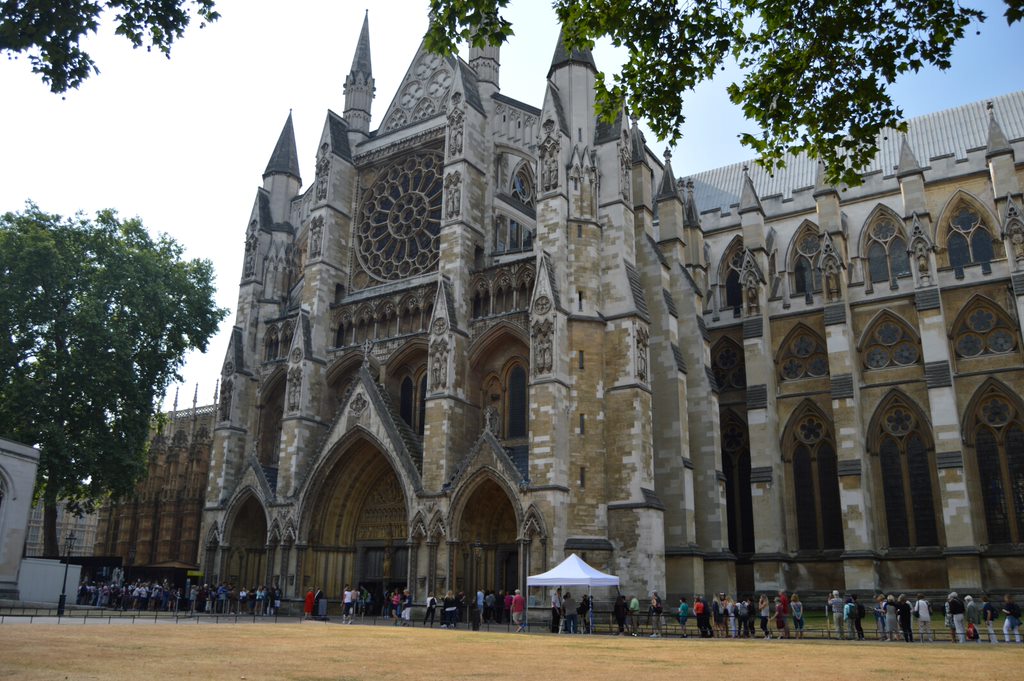 Just across the street from Westminster Abbey sits Westminster Palace, the location of the United Kingdom’s two houses of Parliament. Audio and guided tours are available much of the time, and you can even book your tour with afternoon tea in a riverside room! For a quick visit, you’ll have to choose between an abbey or a parliament tour, but even with an abbey visit, you’ll still have time to cross the street and admire the palace. Big Ben is of course right there, but has been under scaffolding since 2017, projected until 2021.

From the park beside Parliament, Victoria Tower Gardens, enjoy a nice view of the Thames. You can even see the London Eye downriver. 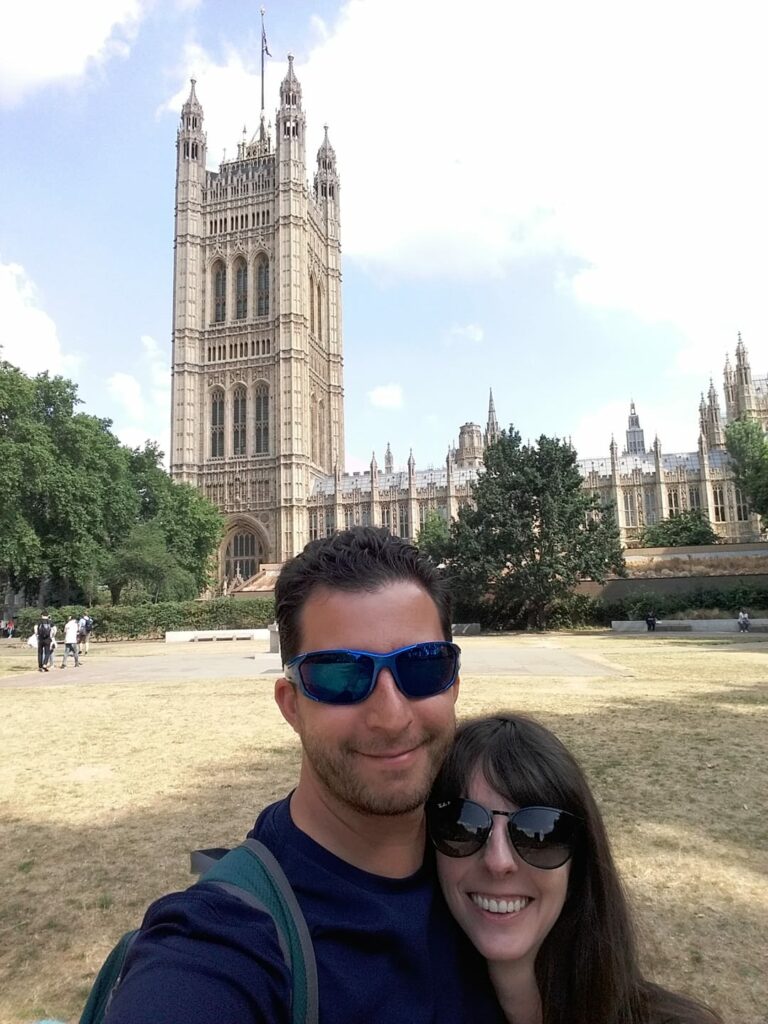 Thankful for my partner in crime, who puts up with my travel shenanigans!

The famous palace is only a 20 minute or less walk from Westminster. The Changing of the Guard takes place most days at 11am, although people begin arriving much earlier. This was the highlight of our layover trip, in the most comical, never to be repeated manner.

Walking through quiet, well manicured residential streets, we began our approach to the palace. The closer we got, the more crowded it became. Evidently, the entire city of London turns out for the Changing of the Guard. Tour buses line the road leading up, and throngs of people fill the sidewalks. We arrived just before 11am, and crowds filled every space up to the palace gate. I kid you not, people were climbing the gate, sticking their selfie sticks through, as the policemen yelled and brandished their batons. There was even people in the trees, trying to get a view! Quite literally, it was a circus full of wild humans. Somehow, I had imagined taking a photo with the famous guardsmen… in reality, I couldn’t even see them.

So, in my experience, the Changing of the Guard can be skipped, at least during high season. This was a Saturday in July. 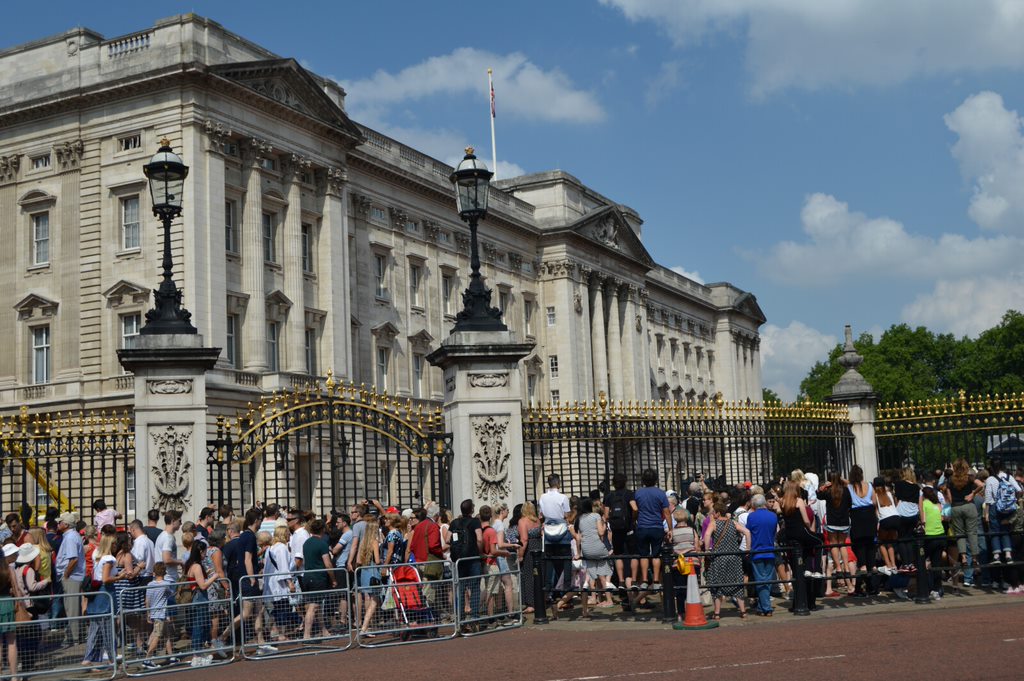 The photo doesn’t do the actual chaos justice…

That summarizes our London layover, just a sampling of what you can do in a short trip, but there are many options in the same area, all close to Victoria Station. The Churchill War Rooms, offices of Winston Churchill during World War II, are a fascinating museum. Nearby is 10 Downing Street, home of the British prime minster. St. James’s Park is also a lovely retreat in the middle of everything.

From Victoria Underground Station, you can zip off to just about anywhere in the city. It’s a quick ride to Tower Bridge or the Tower of London, but I’d recommend saving those for a longer visit.

As the famous saying goes “when a man is tired of London, he’s tired of life’. There’s so much more to see, London deserves multiple, longer visits! If you’ve had a short London experience, share it below! Cheers! 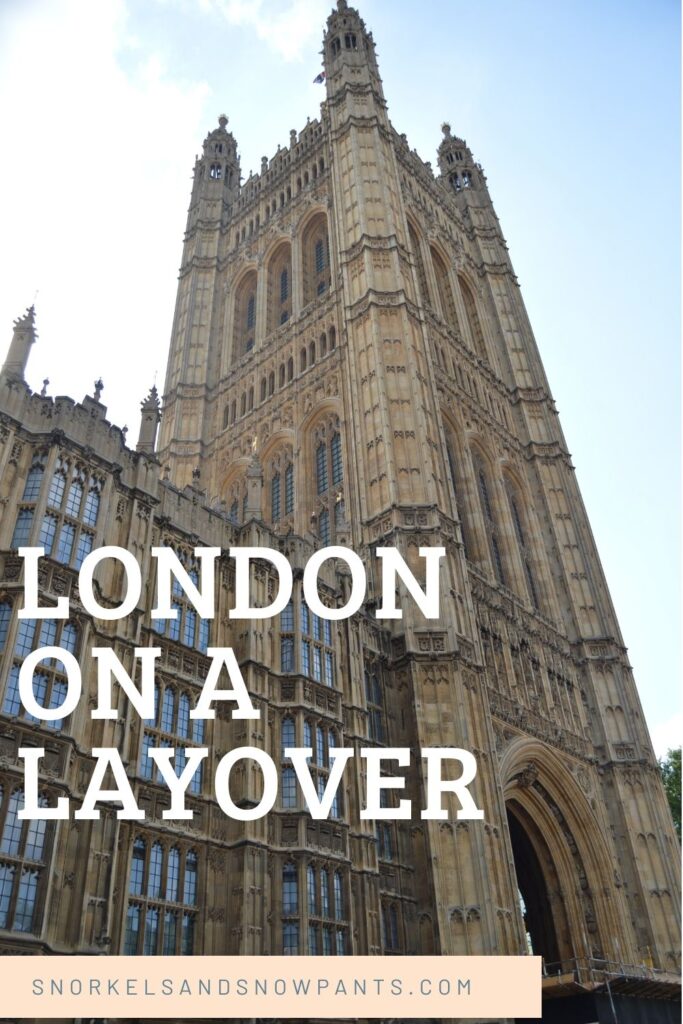 Things To Do During the Chicago Winter!

Top 5 Things to Do in Racine

My friends had a6 hour layover and did the same thing, a quick whistle stop tour. The good thing is there are plenty of places in London quite close together but you should get there again soon as there’s so much more to see.

Agreed, despite being such a huge city, London is actually very conducive to a layover trip! I’ll be back in April for a proper visit, looking forward to it!

I love short trips. This is great when you have 6 hours and new experiences in a new city or country. This is my option. Thanks for sharing!

Thanks Victoria! Never miss an opportunity for adventure. 🙂

I never thought about taking time during my layover to visit a city. This is such a great idea, and thanks for the tips on how to make the most of your time.

If you do have an long layover, hopefully you will explore, it’s a great opportunity! 🙂 Thanks for reading!