Ireland’s southern coastline is known for three peninsular drives- Kerry, Beara and Dingle. The Ring of Kerry is beautiful, but seemingly the most popular with tours. Read about it here. Dingle has a reputation as the wildest. The Ring of Beara, alternatively, is rugged and beautiful, with towns dotting the landscape, but you won’t find a hoard of tour buses blocking the road.

We drove the Ring of Beara from our house in Kenmare over a full day. You could easily stay overnight and explore further, but for a day trip, our itinerary is great.

The Ring of Beara is full of stunning scenery, small towns, and many ancient monuments- including Ogham Stones and plenty of stone circles. Leaving Kenmare, follow the N71 to  R571. Take your pick of stone circle stops, including Drombohilly, Cashelkeelty, and Ardgroom, keeping in mind some are off the beaten path and require a bit of a hike.

We arrived in the tiny town of Ardgroom for a mid-morning snack at the Post Office/Gas Station/Café combo. Only in Ireland do you find a gas station with fresh baked good and flowers on the tables. They also sell local pottery, more to come on that.

Right outside, friendly donkeys stuck their heads over the fence for a pat (probably looking for a carrot), and several dogs greeted us with joy. It was so quaint and cute! 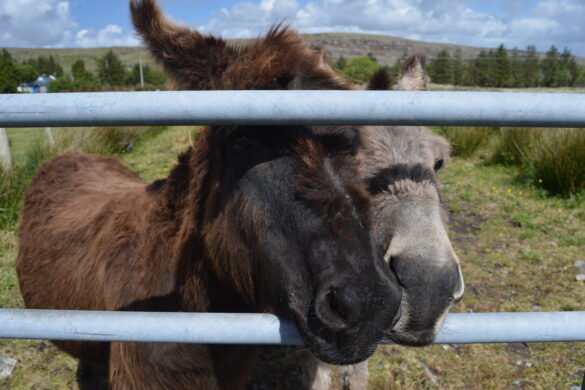 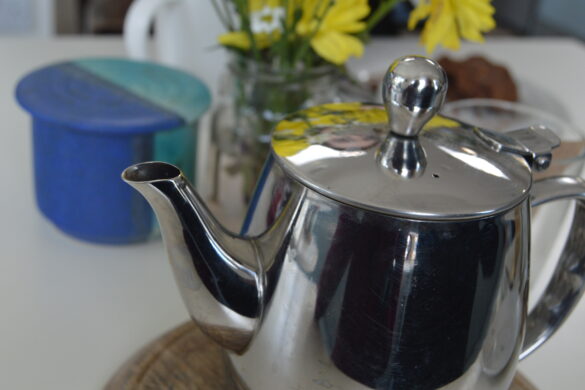 Turning right by the post office, we drove out of town to the Cuas Pier Caves. Don’t miss this stop! There is a small parking lot, but ours was the only car there. The sea caves were beautiful, and we climbed all through them, getting a bit wet in the process. I found a few pieces of sea glass too.

Follow the trail to the ladder over the fence (these are common throughout Ireland, to allow people access but block the sheep). Climb the slightly steep path for excellent ocean views. There is no fence, so be safe! 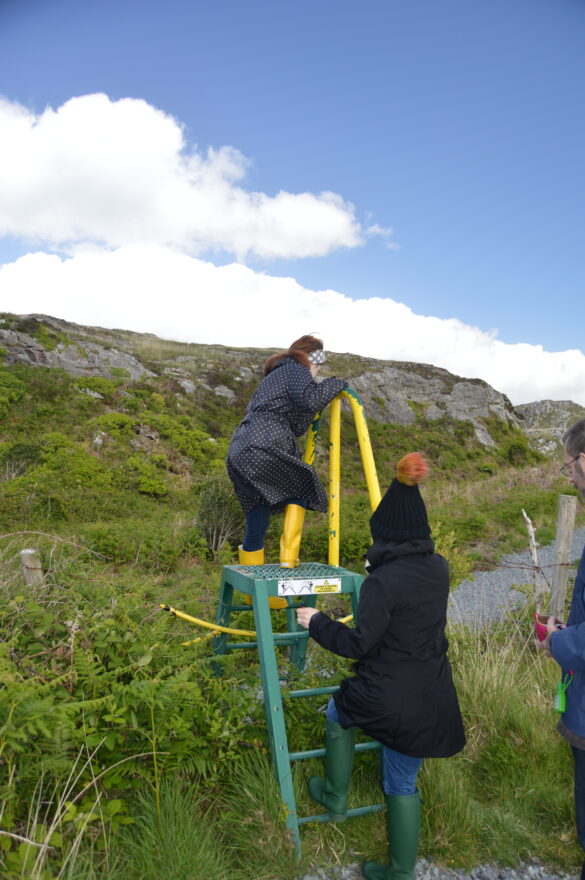 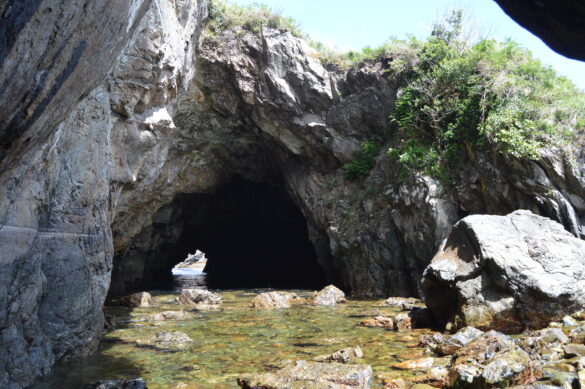 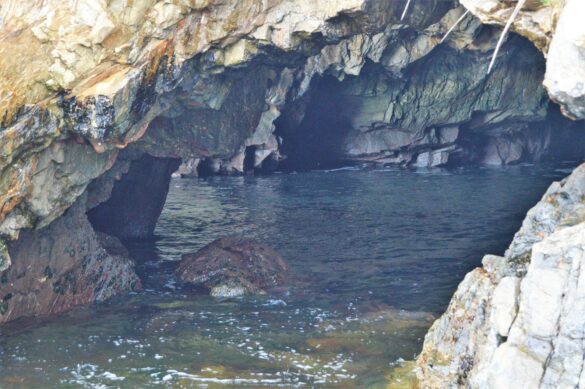 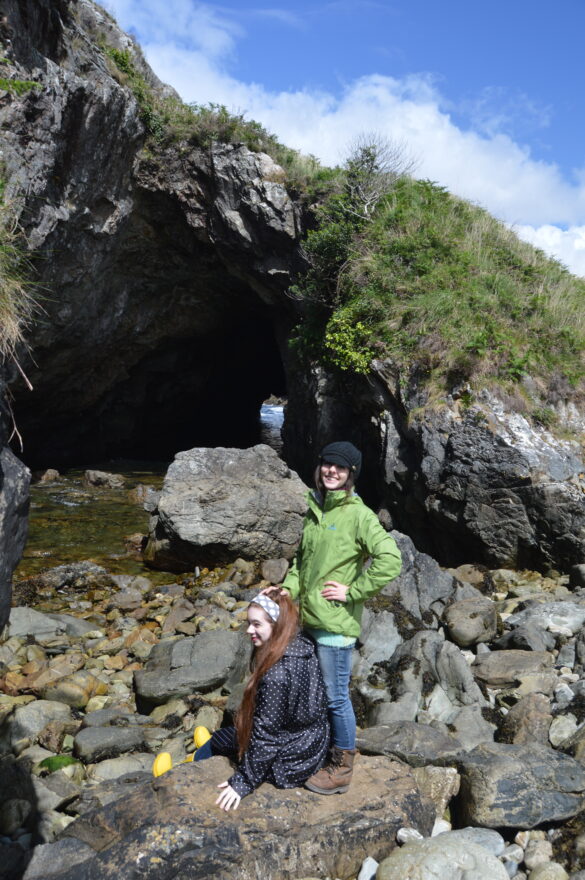 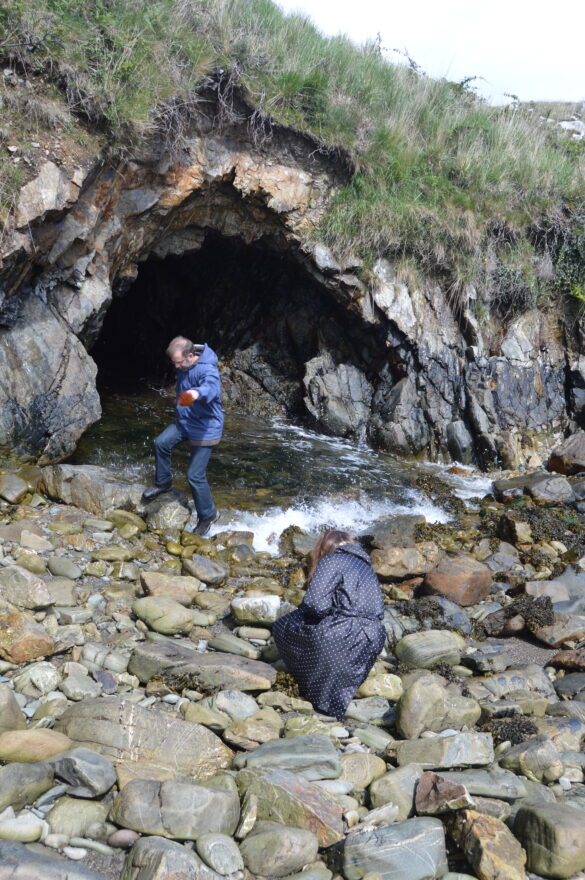 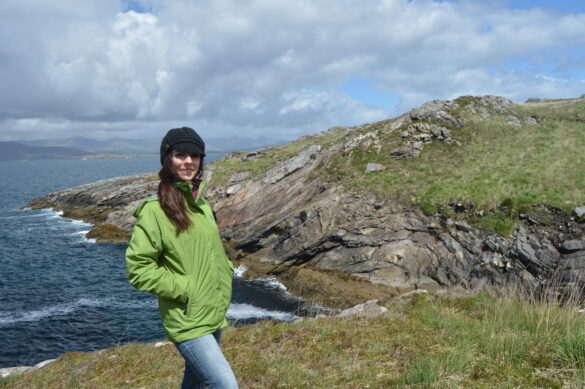 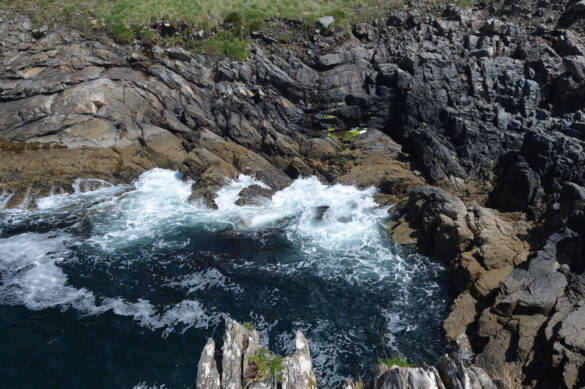 Invigorated by the fresh air and sunshine, we continued onward and followed the handmade signs for pottery (which started in Ardgroom.) Google maps doesn’t find the location, so rely on the signs to visit Marianne Klopp’s Ceramics, on the Coast Road. The studio is next to the house, and we were greeted by the owner’s housesitting friend (funny enough from Florida!) and several sweet dogs. The studio is beautiful- if I could live there, perched atop the hill, views of the ocean, I would! Marianne’s pottery is primarily blue, the color of the sky, the ocean, so fitting when you survey the wild, beautiful surroundings. 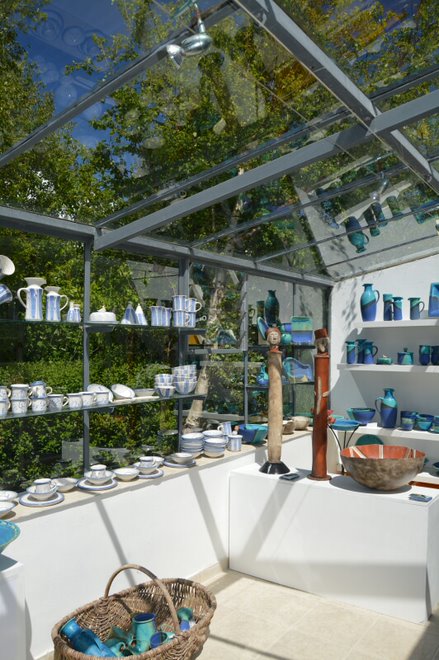 Pottery on the Ring of Beara

Leaving Marianne’s, head towards Eyeries, with a stop at the Hag of Beara. This rock formation is right before Kilcatherine Church, marked by a sign and small gate, and is allegedly the remains of a winter goddess turned to stone by a Christian saint. Today, trinkets are left (in tribute?) on the rock.

Eyeries is a small town, known for it’s multicolored buildings. When we stopped, most everything seemed to be closed. 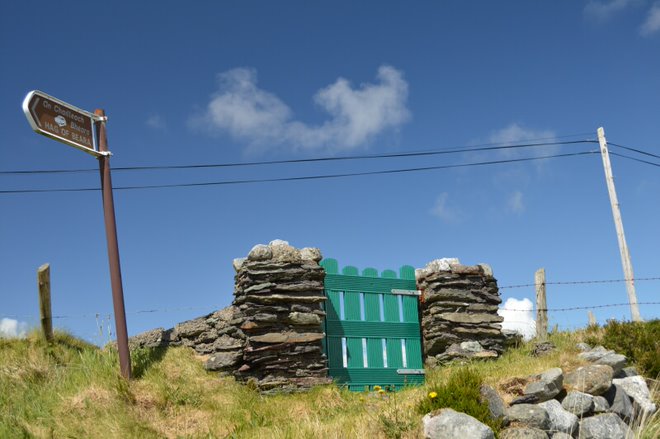 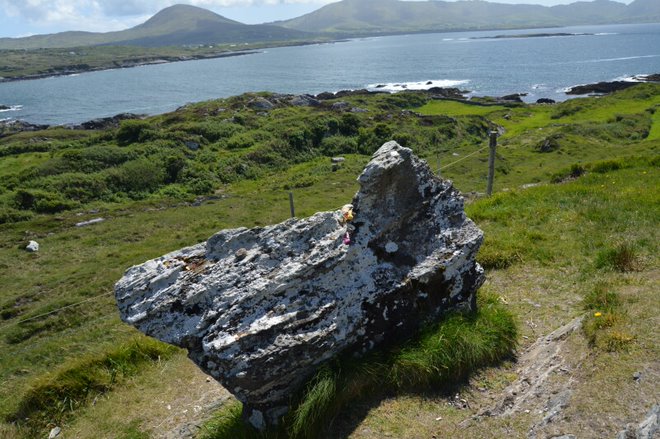 The Hag of Beara

We continued, with periodic stops for photos, to Allihies. It’s a small town too, with several b&bs, restaurants, and a Copper Mine Museum. We ate at O’Neill’s Bar. Most famously, it’s home to the Dursey Island Cable Car. We opted out based on time restrictions, but Dursey Island would be a nice hiking spot.

We allowed ample time to cross the Healy Pass, whose summit is the meeting point between Kerry and Cork. The pass through the mountains was created during the Irish Famine of the 1840s. It has beautiful views. Pull over at the pass for some additional photos. We climbed up a bit farther, off road, for more views. Amusingly, we watched the free range sheep cross the road with caution. Sheep may be considered foolish animals, but I kid you not, we watched one look both ways before crossing the road, and then it called back to it’s fellows, as if to say ‘it’s safe!’ and several others bounded down the hill and crossed the road to meet him (or her). 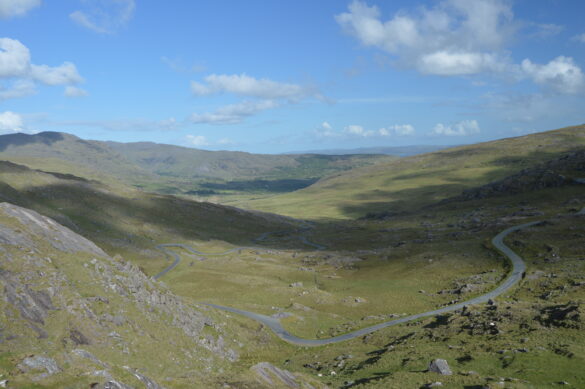 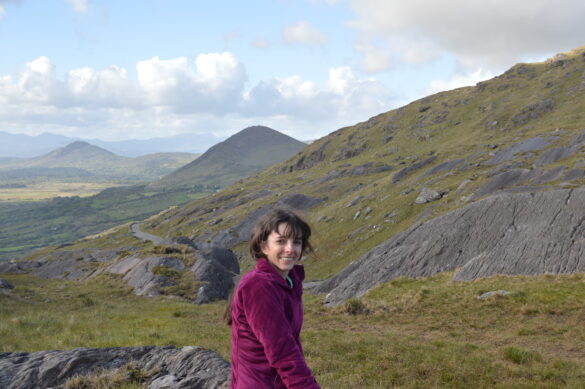 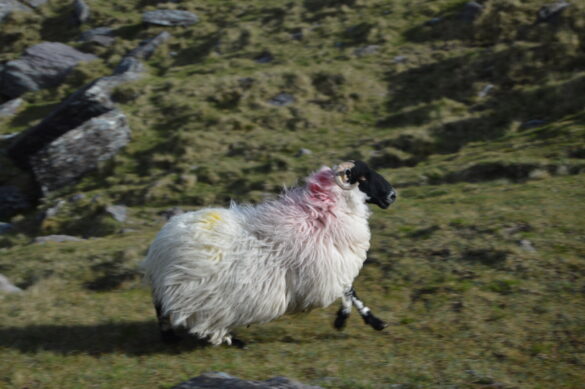 We continued the rest of the way over the pass, to pick up  R571 again and backtrack the remaining distance to Kenmare.

Going and coming on this route, you’ll pass Gleninchaquin Park. It’s a family owned park, basically a nature reserve. We drove down the rather long road to it’s entrance, in the morning, but it wasn’t open at that time. On our return journey, they had already closed. While we didn’t visit, I thought it was worth noting, as it has some beautiful scenery (including a waterfall you can see from the road), and would be a nice hiking and photography spot.

In summary, the Ring of Beara is gorgeous, and not nearly as touristy as the Ring of Kerry. Take your pick, or do both if time allows! 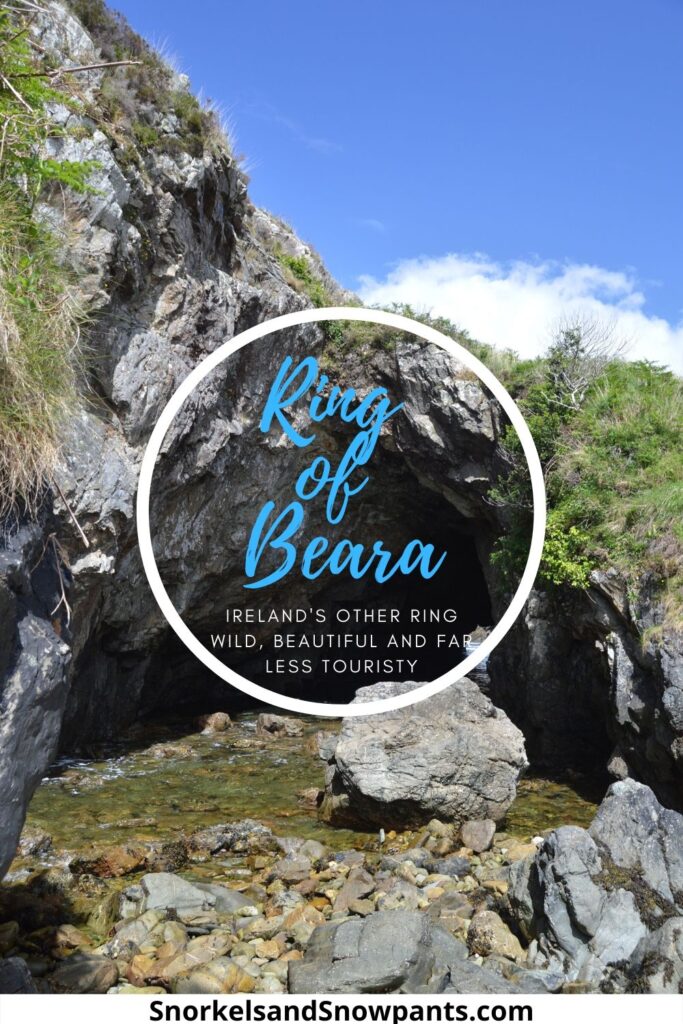 Kenmare as a Base of Exploration